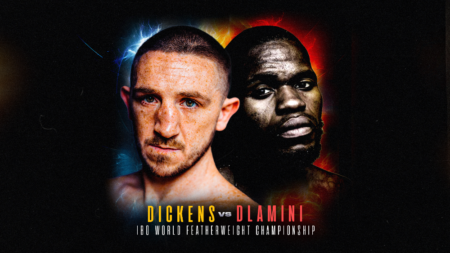 The stakes have been raised for Jazza Dickens after it was confirmed he will now fight for the vacant IBO world featherweight title at Probellum Liverpool II.

Dickens faces the dangerous Lerato Dlamini at the Eventim Olympia on Saturday, October 15 as part of a big punching show that includes Peter McGrail’s hardest fight to date and the UK debut of the frightening heavyweight Bakhodir Jalolov.

Liverpool favourite Dickens knows there is no easy route back to the top of the division after last year’s world title attempt and the fight with Dlamini (18-1, 10KOs) comes on the back of April’s clash with former European champion Andoni Gago.

Dickens (31-4, 12KOs) sparkled in front of his home fans that night, impressively stopping the Spaniard, but the 31-year-old is braced for a tougher night against South African Dlamini, with the IBO crown now up for grabs.

Jazza Dickens said: “My route back towards the top of the division is laced with dangerous fighters, none more so than Dlamini.

“But if I want to land those huge fights with Josh Warrington, Leigh Wood, and the rest of the other champions, then I have to get past him.

“There is no room for error, I must produce the best performance of my career and so the stakes are extremely high on October 15.”

Dickens will not only put himself in the frame for featherweight mega fights by winning the vacant IBO belt, but the southpaw can also follow in the footsteps of two legends.

Marco Antonio Barrera and Prince Naseem Hamed have previously won the title and the crown was on the line when the pair met in a 2001 Las Vegas showdown.

But Dlamini arrives in Liverpool in confident mood having warmed up for the IBO clash with a fourth round TKO win, on Saturday night.

Dickens’ shot at glory comes as Probellum return to Liverpool following the huge success of April’s event, in which Paul Butler set up an undisputed world title fight with Naoya Inoue, by out-classing Jonas Sultan.

Probellum Liverpool II sees McGrail headline his first show, when he takes on Nicaraguan hardman Alexander Espinoza, with 6’7” Jalolov ready to reinforce his reputation as the heir apparent to the heavyweight crown.

An undercard packed with next gen talent features Joe McGrail, Steven Cairns and Will Cawley, while the seasoned Alex Dilmaghani sharpens his tools ahead of a major fight, penciled in for later this year.

Otto Wallin to Dillian Whyte: “Pick up the phone and call my team” Andrew Moloney looks to shine in Melbourne on October 15