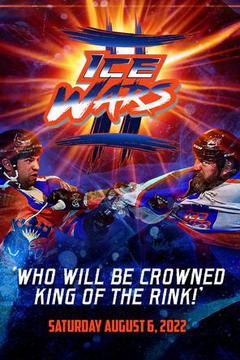 Ice Wars International burst onto the scene in early 2022 when they announced their intention to start a new combat sport that they described as ‘Prize Fighting on Ice’. Their inaugural event took place at the River Cree Casino on May 21, 2022 – to the delight of the crowd in attendance, but more so to fans at home. Viral clips hit social media throughout the night, and in under a week, Ice Wars highlights were viewed over one million times, and the event PPV streamed in 11 countries. The night saw 10 bouts take place, with the combatants consisting of mostly current and past ice hockey players.

When Ice Wars announced their second show was to take place August 6, back at the River Cree Casino in Enoch, Alberta – right outside of Edmonton, Ice Wars President A.J. Galante saw participant inquiries quadruple, and a wide range of different athletes outside of hockey players, who were interested in competing. “I’ve been in the boxing business for over 11 years, I own a boxing gym and I have seen the past few years a shift of the type of athlete that is looking to get into boxing, and MMA as a whole, either as a training method or even to compete.” Galante continued, “I wasn’t really surprised after the success from our first show, that we would have a lot more guys from other combat sport backgrounds were looking to get involved. There is no set schedule for a combat sport athlete, it is really a grind, lots of uncertainty, and sometimes fights are spread out over several months, so to keep motivated, these men and women look to stay busy, sharp and relevant anyway possible, even going outside of their comfort zone.” Galante, who operates as a Professional Boxing Advisor and Promoter in Danbury, CT, an hour North of New York City, said he was taken back on the boxing culture in Edmonton. “The boxing world is small, but also big at the same time. I operate in the Northeast of the United States, I’m not too familiar with every corner of the world, and I was really excited to see the boxing culture in Edmonton, there are some serious diamonds in the rough here. With some more exposure and opportunity, I think the boxing world will really be able to see what Western Canada has to offer.”

Naturally, Galante and the Ice Wars organization have been able to give bout contracts for their second show to local fighters who predominately box but have backgrounds in their nation’s #1 past time, hockey. Edmonton’s own Blake ‘Shake n’ Blake’ Anderson is an undefeated Professional boxer currently 2-0 who hasn’t competed in the ring since 2019, will make his Ice Wars debut August 6. Dustin ‘Night Train’ Thompson, also of Edmonton, is set to strap on the skates as well at Ice Wars II. Thompson is an amateur boxer with over 30 bouts, who has competed in both Provincial Championships and the Golden Gloves. Thompson’s coaches, Lincoln Suchit and Dana Paulson, trainers at the renowned Southside Legion Boxing Club in Edmonton, also train another Ice Wars fighter, Bo Cornell. Suchit says he sees the value in this new sport for fighters looking to stay busy, diversify their resume, while also taking advantage of a global spotlight, “Ice Wars is a fantastic new fight platform for fighters to showcase their skills to the world. I think it’s a great new opportunity for these athletes to get exposure and this sport is a fight concept that brings different audiences together. AJ and the Ice Wars team have brought a refreshing new look to the combat sport world and every fighter is treated like a world champion.”

Ice Wars II is being streamed world wide on FITE for $19.99 and can be preordered on www.iwifights.com. Tickets are available on Ticketmaster starting at $50. For media inquiries contact Lindsay@iwifights.com . Stay up to date on all things Ice Wars on all social media platforms @iceiswar