“I’ll Teach Him a Lesson” – Luke Campbell on Ryan Garcia 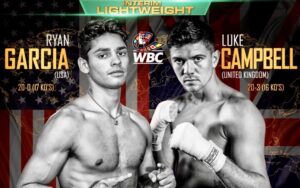 Luke Campbell (20-3, 16 KO’s) has come up short in two bids for the world title, losing to Vasyl Lomachenko and Jorge Linares. In an agreed fight, he will be up against the unbeaten but untested Ryan Garcia (20-0, 17 KO’s).

“He has bitten off more than he can chew. His promotional team must think they’ve had enough of him and they’ve thrown him to the dogs. I was surprised they put him in with me. I’m really looking forward to this one. This is a big opportunity to show the world that I’m not playing games,” Campbell told The Daily Star

“All these are great at talking, they are playing games. This guy is just playing games. I’ll teach him a lesson. He’s going to be sorry for this one. I’m not one of them who is bitter and thinks ‘I deserve it’. I just go in and put 100 percent in and I know the best of me can beat anyone in the world. I’ll retire when I want. There are no miles on the clock, I’m still fresh but when I’ve had enough it will be my decision.”

Campbell (20-3,16 KO’s)  has come up short in two bids for the world title, losing to Vasyl Lomachenko and Jorge Linares.

A win over Garcia will put him in line for a shot at the WBC title.