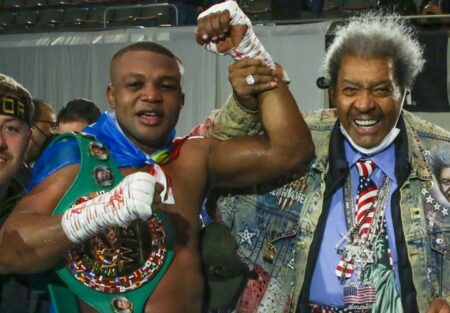 One of the most exciting fighters in the world, WBC World Cruiserweight Champion Ilunga Junior Makabu will defend his title against the WBC Silver Champion Noel Mikaelyan on Saturday, Jan. 21 at the Casino Miami Jai-Alai.

“These are the two best cruiserweights in the world,” said King.  “We are going to give Miami and boxing fans across the country another action-packed boxing card.  Makabu will show the world once again why he is number one and Mikaelyan is out to prove he’s the best.”

Makabu (29-2, 25 KOs) will defend his title for the first time in a year.  He last fought Jan. 29 of this year in Warren, OH, winning a split decision over Thabiso Mchunu.  That victory was only his second defense of his title since Dec. 19, 2020.

Makabu won the vacant title on Jan. 31, 2020 in South Africa in scoring a unanimous decision over challenger Michael Cieslak  and defended the title 11 months later on Dec. 19th and knocked out Olanrewaju in the 7th round in Kinshasa.

Makabu, 35, who hails from the Republic of the Congo, has won 10 consecutive fights since his second career loss coming in the WBC World Cruiserweight Championship on May 29, 2016 when he got knocked out in the third round by Tony Bellew.  The bout was a slugfest as Makabu knocked Bellew down with a left hook in the first round.

Mikaelyan (26-2, 11 KOs), who is 32-years-old from Hamburg, Germany, became the WBC Silver Cruiserweight champion in his last fight, Feb. 12 of this year as he thoroughly dominated his opponent Youri Kayembre Kalenga in a 12-round unanimous decision.

After losing a close decision to Mairis Briedis in Chicago on Nov. 10, 2018 for the WBC Diamond Cruiserweight championship, Mikaelyan rebounded to win the vacant WBC International Cruiserweight title in Miami on Dec. 12, 2020 as he stopped Jesse Bryan in the fourth round.