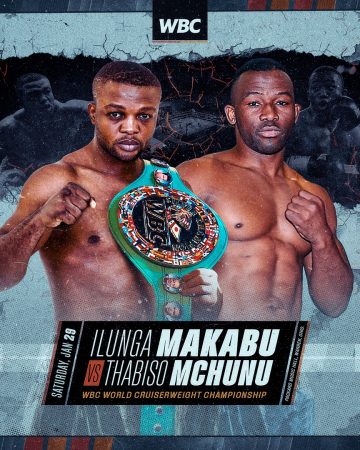 South African southpaw fighter Thabiso Mchunu will arrive to Mexico City tomorrow, where he will be training for a few days for the battle in which he will contest the WBC world cruiserweight crown against Ilunga Makabu.

Mchunu, who comes from Amsterdam, will arrive in Mexico at 7:25 p.m. and will continue his preparation at the White Collar Boxing Club, a gym located in Lomas de Chapultepec. After that, he will travel to the place where the fight will take place in Warren, Ohio, where he will seek to be crowned under a promotion of Don King, the 90-year veteran promoter and one of the best of all time in his specialty.

The champion Makabu, who has a record of 28 wins and 2 losses, will make the first defense of his crown and many think that he will have a dangerous challenger in front of him, since Mchunu has won 23 of the 28 fights. He has knocked out 13 of his rivals and has lost five times.

The Dutch airline KLM will be in charge of bringing the contender to terminal 1 of the Mexico City International Airport.