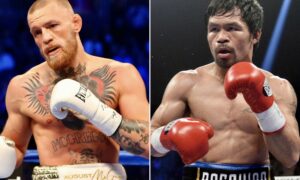 Manny Pacquiao (62-7-2, 39 KO’s) has opened up as a huge favorite against Conor McGregor (0-1), should the fight happen. It is now expected to and is just a matter of time before an announcement is made.

The Irishman’s management confirmed they are in “serious talks” to fight the Filipino great, “but the bout isn’t a done deal yet.”

“I’m boxing Manny Pacquiao next in the Middle East,” McGregor said on Twitter. “It will be a true honour to have faced two of the greatest boxers of the modern era, afraid of a fight.”

McGregor and Pacquiao are targeting a late December, or January 2021 date, most likely in the Middle East.