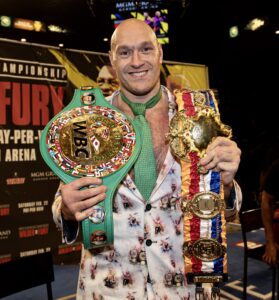 Tyson Fury, the WBC heavyweight champion and lineal heavyweight champion has reassured his fans that his next fight WILL be on December 5th. He took to social media in reaction to the Deontay Wilder camp still saying they want to fight Fury in December. Just twenty one seconds long, the video was straight to the point:

“Hi This is Tyson Fury, the Gypsy King, and I’d just like to announce I’m definitely fighting December 5th in London in the UK. Opponent to be announced very, very soon. Just working on some opponents. Let you all know who it’s going to be shortly.”

December 5th is the stated date by the Fury camp, with the opponent yet to be confirmed. It is heavily rumoured to be Carlos Takam and even stated by Takam himself on social media with the venue said to be the Royal Albert Hall in the United Kingdom.