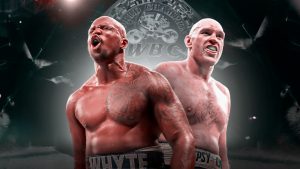 In just two days time, Dillian Whyte AGAIN takes on another hard task in the form of the former heavyweight champion of the world, Alexander Povetkin. It is the most significant heavyweight fight (card) since COVID-19, a fight Dillian Whyte did not have to take. He risks his WBC silver heavyweight belt and his mandatory No.1 ranking, patiently waiting for his shot at one or all of the heavyweight title belts.

In Povetkin (35-2-1, 24 KO’s), he takes on the 2004 Olympic heavyweight gold medalist and former WBA heavyweight champion (2011-2013) who has a boxing A-Z resume and the who’s who of the modern heavyweights. With only two defeats, the first against Wladimir Klitschko in 2013 then Anthony Joshua in 2018, even at age 40, this bout is not a formality. Though past his best, what he has left is the question as he is in the opposing corner to Whyte this Saturday.

Assuming Whyte wins, and I expect him to in a close affair, it will be on to the next fight, and it is a fight that has to be given to him….his way overdue crack at whoever holds the WBC heavyweight crown. He has waited for over 1000 days for it, has been promised it and the WBC have now ordered it. It must happen before the end of February 2021.

Whyte has no faith in Tyson Fury honoring the WBC’s order and says that he does not want to become champion if the belt was handed to him if Fury (or Wilder if he wins the third fight) gets stripped of the title for not defending the title against him by Feb.

“They can’t go back on their word back change it again,” Whyte said. “I say that, but they done it before. I think they would not want the embarrassment which would come with doing that, and rightly so. I’ve earned it, I deserve it, I’ve been waiting for three years.”

“Fury hasn’t behaved honorably towards me at all. One minute he says he wants to fight me and then the next minute, he says he won’t fight me.

“Fury just really talks a lot of rubbish man. He says whatever he thinks. He’s someone who never sticks to anything he says. He’s always saying one thing today and something else tomorrow. His mind is like the wind, it changes direction all the time.”

Frank Warren, Fury’s promoter, has made it clear that Whyte is not the route Fury is going to take and would vacate if needed.

“Frank Warren can say whatever he wants, the WBC have said it must happen,” Whyte said. “It’s legal process. Frank Warren says a lot of things. He’s just trying to deviate from the Tyson Fury fight.

“They know I love to fight and it doesn’t take much to get me going, so they’re just trying to throw some bait out and hope I bite. If they strip Fury, I wouldn’t have to fight anyone for the title because I am the interim world champion.

“I’ve had enough fights to justify being a world champion. I don’t want that, I want to fight Tyson Fury because everyone says he is the best heavyweight alive and he’s the best heavyweight to walk the planet. Hopefully he’s going to be a man of his word and fight me and not be a coward and vacate.”

With December (possibly the 21st) the date that Fury and Wilder will sort out their differences for a third time, the winner will then fight Whyte (or Povetkin if he wins). The Russian former heavyweight champion is 40-years-old and has only lost to Wladimir Klitschko (2013) and Anthony Joshua (2018).

“He is a very experienced guy, top of the tree for 15 years, a former Olympic gold medalist and world champion,” Whyte said to Sky Sports.

“For me? I’m straight maximum violence. I respect him and that’s why I trained so hard. I take him seriously. He is very dangerous and he knows that, if he beats me, his whole life and career is rejuvenated. I’m coming to cause chaos and violence in the ring.

“I expect a sharp, focused Povetkin to come into the ring. He looks good, focused. He looks young. In his last fight he showed that he is still motivated because he had a bad start but finished strong. We know he has a good chin. We know he has only lost to reigning world champions, Anthony Joshua and Wladimir Klitschko. One good thing I have? I learn and adapt as the fight goes on. I make adjustments that I need to make. Sometimes I box, sometimes I haven’t looked the greatest but I find a way to get the job done. That’s one of my secret weapons – I am very good at adapting to the situation.