“I’m The Best One on Their List” (Fury) Michael Hunter 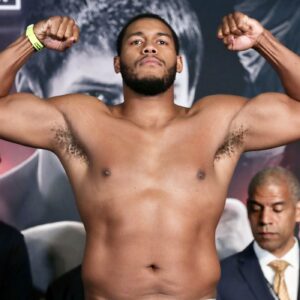 ….and next offering his services for December 5th is Michael Hunter. The queue to be Tyson Fury’s next opponent is getting longer by the day.

Frank Warren supposedly has a list of five names and Hunter is probably on it….

Hunter told Press Box PR: “I don’t think there’s going to be a fight with Tyson Fury because there are easier fights. They would rather have easier fights, but you never know. I think I pose more of a threat than his original opponent Deontay Wilder.

“I’m the best one on their list, but I can guarantee they’ll pick the easiest or softest opponent. It’s not about fighters fighting the best people anymore. Fury needs the fear factor, but he doesn’t need to be in fear. He wants to be a little scared, he does not want to be totally scared. Technically, energetically, spiritually I would not be the right business move.

“It would be more honourable to fight someone like me, but in this day and age it’s more business. It’s all based on money. I guarantee they’ll get a cheaper opponent in and it will be a lot easier, that’s just the world we live in.”

“I would fight for free, I’d fight Tyson Fury for absolutely nothing. There’s a lot of budget being saved right there, and they still wouldn’t fight me.

“I see this as a Tyson Fury move rather than a Top Rank move – I think the amateurs has a lot to do with it. People say it was the amateurs and it was a long time ago, but it’s a little different when you beat him how I beat him.

“I felt I beat my guy every step of the way, It wasn’t really close. I felt I won a unanimous decision and almost by knockout, I had him out on his feet towards the end. It’s the same nature if we fought now, you’d see him in deep water. Taken to a place he doesn’t want to be. I would cut the fight short.

“The only thing he has is he’s bigger than me. He’s not stronger than me, faster than me, he has nothing more than me. His will isn’t as strong, his mental capacity – we know that has some faultiness to it – I could see a lot of things I could capitalise on.”

It would be an interesting fight and the amateur story between the two may sell more PPV tickets (if that is the case). But, with Hunter….Tyson, beware of banana skins.