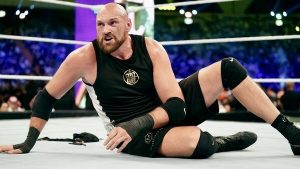 Having not fought in a boxing ring since February (in the Deontay Wilder rematch) with December 19th still the hot date, against who is the big mystery. I don’t think anyone really knows. Tyson Fury is currently weighing up all options including another pantomime, sorry, wrestling match.

He has participated in one bout in October of 2019, beating Braun Strowman. He made a lot of money from the bout, his crossover fan base naturally grew and I’m sure he had a lot of fun along the way. And why not? Don’t shoot me for saying this but it isn’t ‘real’ as such and as long as no injury’s occur whilst acting, again, sorry, ‘fighting’, it won’t conflict with his boxing career (it didn’t with Wilder II).

It looks like Drew McIntyre is next in line whom I can honestly say I know nothing about apart from he is the heavyweight champion, you might as well be speaking Japanese to me. I believe he is at the top of this domain but I have no interest in wrestling whatsoever so excuse my naivety on the topic (as is the case with football and any other sport).

Moving away from my lack of knowledge about anything else and back to Fury and his list of future (possible) victims:

“Been sitting on the train on my own after a long, busy weekend and I’m thinking about the people that I want to punch in the face. The first one that springs to mind is a big fella called Drew McIntyre. Now Drew, you’ve been having quite a bit to say about me lately. I love to punch your face in honestly,” Fury said.

“So grow a pair, step up to the plate, like I say to your mate AJ, and come and fight the master. Me. This is an official challenge video to Drew McIntyre, the WWE heavyweight champion. I already knocked your pal out, Braun Strowman, I’ll do the same to you. Bring it.”

Full of natural charisma, Fury is made for wrestling. With all the above benefits that Fury gains from a second bout it all makes sense.

I like most boxing fans just pray for the top heavyweight boxers to get it all together. COVID-19 has thrown enough complications into current matchmaking and hopefully 2021 will bring mouthwatering fights not just crossover events.