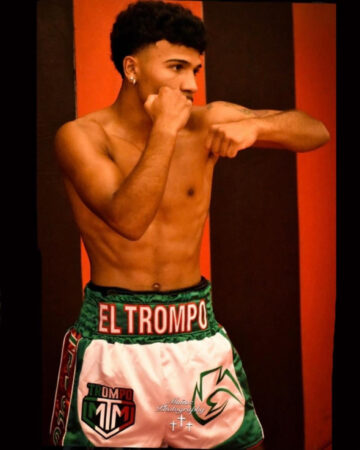 The 18-year-old Emanuel Moreno is a six-time National Champion, with an amateur record of 141 wins and only 15 losses.

Moreno started boxing at age six with Coach Mike Zapata. The duo won multiple national titles before Moreno made the jump to the paid ranks in November. In his professional debut, Moreno won a unanimous decision against tough veteran Christian Alejandro Silva in Oklahoma City.

Trifon Petrov of Imperial Boxing is very happy to be able to add Emanuel Moreno to his team.

“Manny is a special talent. He is the full package, from amateur pedigree, to charisma, to fighting style. When Manny Moreno steps in the ring, he keeps you captivated. He has all the tools to become not just a world champion, but one of the best fighters in his generation,” said Petrov.

Moreno was a very sought after fighter, but ultimately he chose to sign with Petrov.

“I had a lot of interest from a lot of other managers, but ultimately Trifon Petrov made a lot of sense for me. The work he’s done with his other fighters speaks enough. I’m very grateful for his belief in me, and with his guidance I am sure that I will reach my dreams in this sport. Being a professional is an exciting challenge for me. I have been perfecting my craft since I was six years old, and it’s time to show the world what I can do. We’ve put in countless hours in the gym, and on the road fighting and being ranked among the top amateur’s in the country. I am now looking forward to the future, competing on the professional level and working my way up to the top of this sport. I have ambitious dreams, and I feel I can achieve them all with Gods favor and in Gods Time. I’m very thankful for my family. My team. My friends and fans who have supported me on this journey. This is only the beginning,” said Moreno.

Emanuel Moreno is expected to be back in action in February.