Interview with Dennis Hobson and Steve Crump of Fight Academy 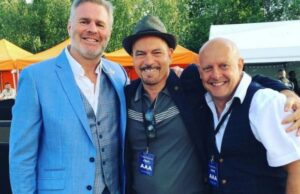 Dennis Hobson has promoted events all over the world, from Las Vegas to Lincoln, Monte Carlo to Manchester … but there’s no place like home.

This summer, Dennis and boxing partner Steve Crump dared where other UK promoters didn’t and – not only – put on a series of shows, but erected a purpose-built outside arena to host them!

The Fightzone Arena shows in Sheffield had everything – passionate fans, fight of the year contenders, upsets, title winners, lots of great memories and a fantastic new boxing channel broadcasting them … Fightzone.

Here, Dennis and Steve take stock and look back over a special time for Sheffield and British boxing:

You’ve been involved with boxing for years at all levels. Looking back, how do you view the series of events at the Fightzone Arena?

[Dennis] It was very satisfying for it all to come together; a highlight of my career.  It was just an empty car park, and with the Covid restrictions I wondered whether we could do it, but we created something spectacular.  It had a Glastonbury feel to it!  People were outside, had a drink and watched some quality matches.  We also had a lot of boxing personalities [Ricky Hatton, Kell Brook, Johnny Nelson, Sunny Edwards] that came down and wanted to be part of it.  By working with other promoters from around the UK, so there was also a lot of togetherness.

[Steve] It was so special because we were doing something that hadn’t been done before. We did the UK’s first ever drive-in boxing show in December, but to set up this little mini festival of boxing was amazing. And don’t forget we were fighting against Covid, against the elements, and launching the Fightzone channel at the same time! We were nervous and confident, but it was a priceless experience.

There was so many great fights on the shows, what was the most entertaining to watch?

[Dennis] For me it was the Poet Laureate! Matt Windle and Neil McCubbin, I loved that fight.  Credit to both of them because it must be in contention for ‘fight of the year’.  It just sums up what we’re trying to create, two kids absolutely going for it on our platform.  It epitomised what Fightzone is all about.

[Steve] Gosh, this a tough one!  Jack Massey had high expectations on his shoulders but he really delivered to win the [IBF] European belt.  He delivered really well, and the French opponent didn’t come to lie down, he wanted that title.  Windle and McCubbin was also on a par, that was another tremendous fight.

What would you say was the best individual performance on the Fightzone Arena shows?

[Dennis] I think there was a lot of pressure on Kash [Ali] because he’s a heavyweight, and because of the controversial fight with David Price. Since he’s come with us, we’ve helped him to totally turn his career around.  Now he’s won this IBF European Title, people are starting to look at him seriously.  By beating Tomas Salek in the fashion he did, he should now be world rated by the IBF, so that performance stands out.  I also think Keanen [Wainwright] and Mark Jeffers are special talents too, both also made a statement.

[Steve] I’d probably have to go for Kash Ali.  He had a point to prove because of some the negativity from the Price fight.  He really need to win and he put his marker down in the heavyweights.  His uppercuts were quality and Salek was another guy with a good record who wasn’t here to lose.

Would you consider doing something similar in the future?

[Dennis] We created something very special, and we should look to do something similar every summer, like a ‘box fest’!  We’re British and we love being outside!

[Steve] I’d love to do it all again next year.  Now we’ve done it we can look back and tweak things, but Dennis and I are on the same page about this and I think we’ve created something here to stay.