Iranian Hulk vs. Kazakh Titan at the Dubai P7 Arena on July 31 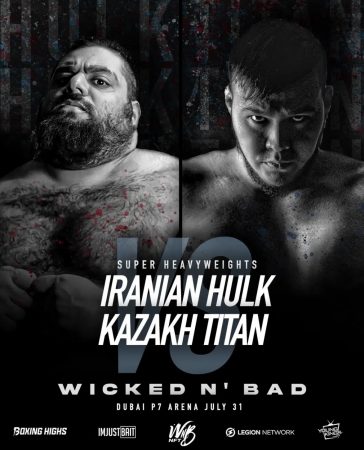 Wicked N’ Bad are pleased to announce their upcoming fight between super heavyweights Iranian Hulk and Kazakh Titan. The fight will be held at the Dubai P7 Arena on 31st July 2022. The globally identified sports and entertainment management company are known for being unique, inclusive, and defiant to the industry.

The Iranian Hulk born in Ahvaz, Khuzestan is 6ft 2 in and weighs 385 pounds. The popular bodybuilder and weightlifter is known for his massive physique and goes either by the Iranian Hulk or the Persian Hercules by his fans. He told us “This fight is for me to set the record straight; I will be a great champion for Iran and I’ll represent my people with respect and all my strength. After I win this fight, I want to challenge myself against Martin Ford, this fight will happen, if Martin is too scared to fight me then the world will know. I’m stepping into the ring now ready to fight”.

Opponent, Kazakh Titan calls himself the ‘master’ of MMA and combat sambo, boasting his super strength, by bench pressing 150kg and claiming to deadlift 300kg. His latest challenge to the Hulk, he threw around a doll with his face on it, declaring his intentions for battle. Now the fight is confirmed, Titan said “Many people are saying they don’t know who I am, but they will see on July 31 who Qazaq Titan is, my power. I am going to make history by winning and making it the most entertaining show that has been in Dubai. When I win this fight, I want to fight Fedor in Almaty and bring the biggest fight to the country ever.”

After calling each other out over social media the contract has been signed and the fight is ready to go ahead in just under a month in Dubai.

Wicked N’ Bad’s last 3 shows have been a proven huge success and this upcoming event which includes a weeklong programme of entertainment plus a night of top-level boxing between world renowned influencers promises to reach over 150 million people worldwide and earn itself the title of one the most anticipated events this year.

Founded by music industry executive, Myles Harris and Large-scale event organiser, Albie Saliba. At the heart of what they do is passion. Passionate about creating a valued, diverse, inclusive, and transformative sport and management company. Their core values are based upon generating a respected space to raise awareness about the sports. They have uniquely unified both sports and music to create a globally recognised brand, challenging the status quo sports management companies.