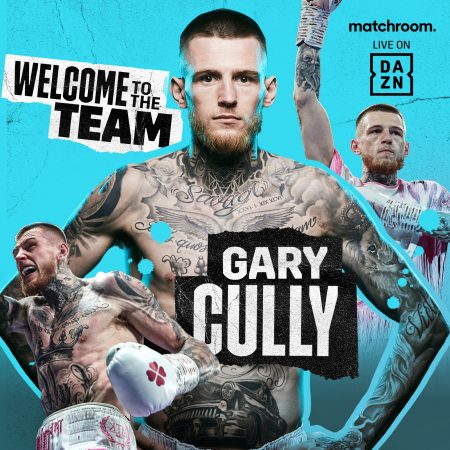 ‘The Diva’, who fights out of the Colosseum Gym and Unit 3 Fitness under the guidance of trainers Pete Taylor and Niall Barrett, has won all fourteen of his fights since turning professional in September 2017 at the Devenish Complex in Belfast.

Cully claimed the Irish Lightweight Title by wiping out Belfast’s Joe Fitzpatrick in the opening round of their clash at Ulster Hall in 2020 before adding the WBO European Title to his collection with a second-round stoppage win over Viktor Kotochigov at the Bolton White Hotel in 2021.

“I’m really excited to be joining the Matchroom Boxing team,” said Cully. “I’ve had my sights set on joining Matchroom long before I turned professional so to finally be here is massive for me. My last fight was on a Matchroom card back in March – the huge Wood vs. Conlan bill. I saw how they did things and it reminded me that this is where I wanted to be. I’m glad to finally get it over the line.

“I’ve always said that with the right promotional team and the right backing I believe I can reach the very top of this sport and be a huge name in boxing. I believe that with Matchroom behind me I’m in the right place to do that. I’ve got big dreams in boxing; I want to be involved in the biggest fights with the biggest names. I want the likes of Gervonta Davis, Ryan Garcia and Devin Haney.

“With Eddie and Matchroom backing me I’m in the right place to make these fights happen. I also have big dreams of brining big-time boxing home one day. I remember going to The O2 arena back in the day to see Bernard Dunne win his World Title when I was just a kid starting out in boxing. Ever since then I’ve dreamed of bringing boxing back home and having big fights back in Dublin one day. The ball is in my court now.

“I just need to keep putting those performances in that I have been in the last two years. I think the performance that I put in against Miguel Vazquez in March proved the level that I’m capable of operating at. He’s a former World Champion that has fought the likes of Canelo Alvarez and Timothy Bradley. He came over to the UK in the past and gave some big names a few problems there as well. The skills I showed and the way I got him out of there in the end proved that I can operate at the highest level.”

“I’m delighted to add rising Lightweight star Gary Cully to the growing Matchroom Boxing team,” said Matchroom Sport Chairman Eddie Hearn. “I was hugely impressed with how he dealt with former IBF Lightweight World Champion Miguel Vazquez on our show back in March after so many had previously struggled with him. I’m confident that win is a sign of things to come for one of Ireland’s most talented fighters. The Lightweight division is up there as the most exciting division in boxing and Gary has huge confidence in himself to make his own mark on it. With the backing of Matchroom Gary has all of the tools he needs to achieve his dreams.”