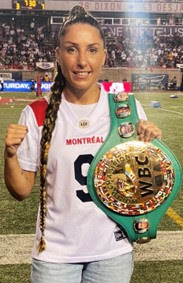 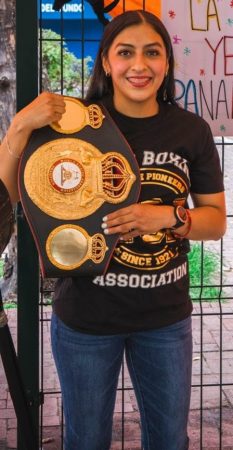 IRRESISTIBLE II is a Mise-O-Jeu presentation in collaboration with Bell Media.

Clavel, 31, won her WBC crown on July 29 in Montreal, defeating defending champion Yesenia Gomez (19-5-3) by 10-round unanimous decision at the Casino de Montreal in a dazzling performance that unanimously delighted the people of Quebec. The native of Joliette became the 2nd woman and the eighth GYM world champion. She became the 4th active champion in Montreal by joining champions Marie-Eve Dicaire (IBF), Oscar Rivas (WBC) and Artur Beterbiev (WBC/WBA/IBF).

For Kim Clavel, it is a challenge worthy of her ambitions: “Since my conquest of the WBC world title, I have received thousands of extraordinary testimonies that touch me enormously. On December 1, I want to thank all my supporters for their support by launching me into this unique challenge to become unified champion. I promise not to disappoint you!”

Yesica Nery Plata is equally excited about the opportunity: “I won my WBA title by dethroning champion Yesica Bobb in Panama so I’m not afraid to go to Canada for this major fight in my career,” said the Mexican. “This unification is what I have been longing for a long time and it comes at the right time when I am at the peak of my career. My goal has always been to face the best, Kim Clavel is part of this category, and I am grateful to her for having accepted this duel.”

“It’s been a long time since we’ve seen a local pugilist arouse so many passions,” said GYM president Yvon Michel. “It was without hesitation that we took the gamble of reserving Place Bell for this first unification world championship in the history of boxing in Quebec, by a boxer from our region. We will be able to welcome the many fans of our new champion and allow them to attend this historic event IRRESISTIBLE II.”

During the height of the COVID19 pandemic, Clavel returned to nursing to help elderly in Montreal, for which she was awarded the prestigious 2020 Pat Tillman Award for Service at that year’s ESPYs ceremony on ESPN.

Plata, 28, from Mexico City, won her WBA belt in her last outing on March 11 in Panama in a 10-round decision victory over the great champion and former amateur star Yesica Bopp (37- 2, 17KO) from Argentina.

Plata will ride a 7-fight win streak into Laval, winning 13 of her last 14 fights, dating back to 2016. A former WBC Youth light flyweight champion, Plata won the WBA Interim Light Flyweight Championship in 2018, taking a 10-round split decision from Silvia Torres (18-0-1). She successfully retained the WBA Interim title once with a 10-round unanimous decision versus Alondra Garcia (20-3-1) the following year.

Plata is currently ranked at the top of the light flyweight division by independent organization Boxrec.com as well as No. 6 in the world pound-for-pound. Clavel is ranked No. 3 at 108 pounds and No. 21 in all divisions.

This will be the second time that Kim Clavel will be in the main event in an event presented in a major Quebec amphitheater. The first time was against Maria Vargas at Stade IGA in August 2021.

Tickets will be on sale starting Friday, September 23 on Ticketmaster.ca, at the counters at Place Bell or for tables or groups, contact GYM at info@groupeyvonmichel.ca. More details on this will be communicated in the coming days.