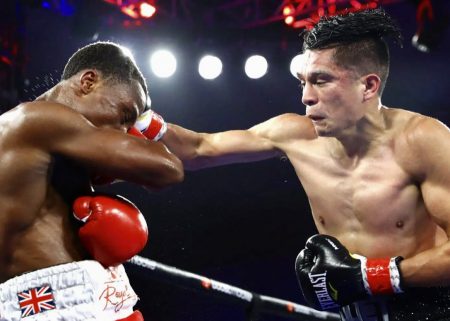 Ghana’s Dogboe defeated two-time title challenger Joet Gonzalez by a 10-round split decision in the featherweight main event Saturday evening at the Grand Casino in Hinckley, Minnesota. The bout was a WBC title eliminator, and Dogboe won the WBO International title, putting him in a prime position to challenge for a world title.

Dogboe (24-2, 15 KOs), who won the first three rounds on two of the scorecards, swept the 10th to earn the win by scores of 96-94 on two cards. Gonzalez prevailed by the same margin on the other card.

Dogboe said, “I said to the people that my journey can be a Hollywood blockbuster movie, and I praise God always.

“I’ve always seen {trainer} Barry {Hunter} as a very inspirational person, a father figure. He’s a person that when it seems like it’s all gone, he always has something to say to you. I really needed him in my corner. He was able to pull that extra strength in me out. I want to say thanks to Joet Gonzalez. He’s a true warrior.

“Whoever the champions are, they should watch out. The ‘Royal Storm,’ I am back, baby!”

Gonzalez (25-3, 15 KOs), who outlanded Dogboe 197-190, believed he did enough to earn the win. Last October, he lost a 12-round barnburner to Navarrete in his second bid for the WBO featherweight title. Despite falling short, he still hopes a third title opportunity is in his future.

Cabrera (21-0, 7 KOs) added a knockdown with a right hook in the fifth, but Flores, the fighting pride of Stockton, California, would not give in. Flores (21-2, 7 KOs) pressed forward in the fight’s second half, doing enough to win a pair of rounds on all three judges’ cards. But in the 10th round, Cabrera charged forward hoping for the knockout.

The knockout did not materialize, but Cabrera, who is trained by the legendary Freddie Roach, did not have to worry about the cards. He had done more than enough to author a signature victory.

“I felt amazing. It’s what we worked on in the gym,” Cabrera said. “Everybody, I think, can see I’m a very slick boxer. As I’ve progressed in the professional ranks, there’s still growth to be had. There’s a lot to learn, and I have the best trainer in the world to do that. I’ve been working on my power. He felt it in the first round. Gabriel Flores is as tough as they come. My hat’s off to him. This incredible fight wouldn’t have been made if he wasn’t brave enough to take it.”

Flores said, “I should’ve kept on stepping to my left. The game plan kind of went to blur. My father was telling me to keep stepping to my left, keep feinting, keep flicking my jab, and keep jabbing. I didn’t really do much of any of that.”

Middleweight: Javier Martinez (7-0, 2 KOs) UD 6 Chino Hill (7-1-1, 6 KOs). Scores: 60-54 and 59-55 2x. Milwaukee’s Martinez picked up the most substantial victory of his young career, nearly shutting out the savvy native of Davenport, Iowa. The Robert Garcia Boxing Academy-trained Martinez landed 25 more punches than Hill and connected at a 48 percent clip. Martinez, a one-time U.S. amateur standout, has been spotless since turning pro inside the MGM Grand Bubble two years ago.

Heavyweight: Guido Vianello (9-0-1, 9 KOs) TKO 4 Rafael Rios (11-4, 8 KOs), 2:59. 2016 Italian Olympian Vianello returned from a nearly 13-month layoff and didn’t skip a beat, lacing Rios with combinations until the finish came at the end of round four. Rios, with his nose bloodied, ate a vicious uppercut, then a combination capped by a left hook to the body that put him down for the 10-count.

Featherweight: Haven Brady Jr. (7-0, 4 KOs) UD 6 Aaron Echeveste (6-8, 3 KOs), Scores: 60-54 2x and 60-53. Brady put forth a workmanlike effort against Echeveste, an eight-year pro who has only been stopped once as a pro. He pressed for the knockout in the sixth round, landing a series of left hooks against the southpaw spoiler as the seconds ticked away.

Lightweight: Abdullah Mason (3-0, 3 KOs) TKO 1 Luis Fernandez (1-4-1), 2:39. The 18-year-old southpaw, from Cleveland, Ohio, showed why he’s one of the sport’s ascending stars with a drubbing of Fernandez. The finishing flurry was punctuated by a brutal uppercut that prompted referee Mark Nelson to stop the fight.

Heavyweight: Antonio Mireles (4-0, 4 KOs) TKO 2 Dennys Reyes (3-3, 1 KO), 2:09. “El Gigante,” the 6’9, 270-pound behemoth from Des Moines, Iowa, ended his evening early with a savage salvo in the second round. He knocked down Reyes with a chopping left hand, and when Reyes rose to his feet, a two-punch combination made the inevitable official.

Light Heavyweight: Dante Benjamin Jr. (3-0, 2 KOs) TKO 1 Corey Thompson (4-1, 3 KOs) 2:24. “Free Smoke” brought it to Minnesota, jumping all over the previously undefeated Thompson in the opening round of the scheduled four-rounder. Benjamin notched a pair of knockdowns, both of which left Thompson reeling into the ropes before the one-sided affair was called off.