Isaac Pitbull Cruz’s team: “He would knock out Lomachenko” 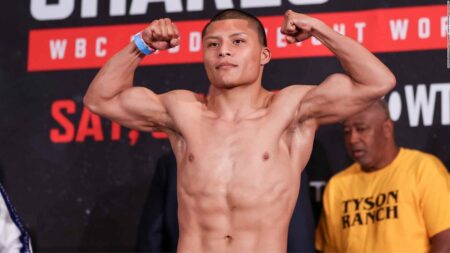 Without hesitation, Isaac ‘Pitbull’ Cruz would fight Vasyl Lomachenko as Orlando ‘Siri’ Salido did and even knock him out. This was assured by Isaac Cruz, father and coach of Pitbull Cruz, who said in an interview with IZQUIERDAZO that he saw the Ukrainian out of rhythm and that they would already know how to defeat him.

“It would be an identical copy of the fight that Siri Salido did to Lomachenko”, he said. “If Siri Salido beat him at a certain age and with great experience, I really have no doubt that we would beat Lomachenko”.

Because of the demonstration that Vasyl Lomachenko gave against Jamaine Ortiz and what he showed in the ring, Isaac Cruz thinks that his son could KO the Ukrainian. “I saw him out in bad shape. I have no doubt at all, and what I could confirm is that the decision would not be reached”, he insisted.

The European defeated Ortiz on Saturday in New York. in an event where ‘Loma’ had struggles against a rival who at times looked good.

Vasyl has suffered two defeats in his career, the first in his second duel as a professional against Orlando Salido. That same pressing strategy would be carried out by Pitbull in an eventual bout.

Isaac Cruz Sr. recalled that in the Ukrainian’s fights, particularly the one with Siri, the Mexican did not give him space, something that affected Vasyl. “We are going to work for that. He was not giving him a break, that hurts Lomachenko”.

And although he acknowledged that the “Loma” has a style that stands out, he knows that what Pitbull does would leave the former world champion without options. “He boxes very nicely, but he is not used to being overwhelmed so much. Pitbull goes over and over”, he concluded.

After winning vs. Eduardo Ramirez on September 4, Pitbull is taking a well-deserved break that will last until March or April.

While Pitbull enjoys his family, the management of Manny Pacquiao Promotions, in addition to Sean Gibbons, analyze what will be the best option for his return to the rings.