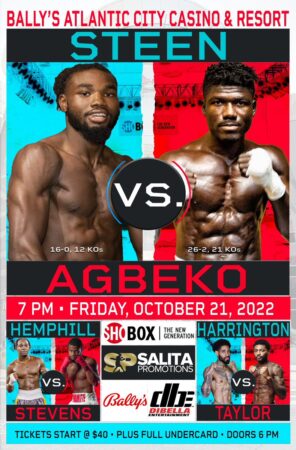 Fast-rising blue-chip prospect Isaiah Steen will get a chance to slingshot himself up the super middleweight rankings when he takes on dangerous power-puncher Sena Agbeko on Friday, October 21 live on SHOWTIME at 9:30 p.m. ET/PT in the latest edition of SHOBOX: The New Generation. The telecast features four undefeated prospects and six fighters with a combined record of 87-3-2 and returns to Bally’s Atlantic City Casino and Resort, site of the first SHOBOX® 21 years ago, for the second time in two months.

The heavy-handed Agbeko (26-2, 21 KOs) steps in to face Steen (16-0, 12 KOs) in the 10-round main event at 168 pounds after light heavyweight prospect Ali Izmailov withdrew from his main event with Radivoje “Hot Rod” Kalajdzic for health reasons. Both Steen and Agbeko are SHOBOX alumni, making their contest a classic crossroads matchup of prospects to determine who’s a contender and who has to work to get back into position in the division.

“Steen vs. Agbeko is an exciting main event and the winner of the fight will be a bonafide world title contender in the super middleweight division,” said promoter Dmitriy Salita. “This is an amazing matchup on a talent-stacked card featuring nothing but pick ‘em fights.”

The chiseled Agbeko represents the most accomplished opponent of Steen’s career, having gone the distance against undefeated contender and highly decorated amateur Vladimir Shishkin in February 2021 on SHOBOX. Agbeko has since won three straight matches, all by stoppages. Most recently he TKO’d then 22-1-1 Winfred Harris Jr. this past July to earn this shot. Originally from Accra, Ghana, home to many top Ghanaian boxers, such as two-division champion Azumah Nelson, Agbeko now calls Nashville, Tenn., home.

“I’m so excited for this opportunity. This is what I train for, to fight on the biggest stages,” Agbeko said. “I know he’s young and he’s hungry and has also been previously featured on the SHOBOX series but it’s not going to be easy for him. It’s going to be a battle of wills and may the better man win.”

Steen returns to SHOBOX after recording the biggest win of his career against the previously undefeated Kalvin Henderson on July 2021 on SHOBOX. An aggressive, come-forward fighter who likes to dig to the body, Steen is the half-brother of super welterweight contender and former U.S. Olympian Charles Conwell. The two shared the same card in August 2020 when Steen of Cleveland, Ohio showed off his power with a first-round TKO of tough Kenneth Council. That was the seventh time Steen stopped his opponent in the first round. Like his half-brother, the 6-2 Steen was a decorated amateur, going 85-15 in the unpaid ranks before he turned pro in 2016. Born in Detroit, Mich., Steen started boxing when he was seven.

“I’m grateful for this amazing opportunity,” Steen said, “and looking forward to facing a great opponent in Agbeko and showcasing my skills.”

Tickets for the event promoted by Salita Promotions are on sale now priced at $40, $100 and $150 and can be purchased at TicketWeb.com.