“It Was a Very Easy Fight” – Alen “The Savage” Babic 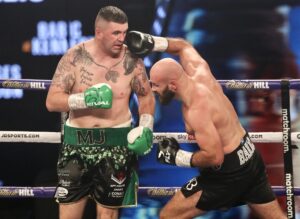 Fresh from his third round win over Niall Kennedy on Sunday evening (on the Buatsi vs Calic fight card), Alen Babic will be back soon and against (I hope) stiffer opposition as he is more than ready for it.

Tom Little is more than likely next opponent for the man known as “the savage.”

“He was badly shaken,” Babic said after his latest KO. “Even two minutes after the fight he was still badly shaken. He was down two times. It was a hard situation. I was savage, but I wasn’t 100% savage. I’m a little bit annoyed at myself. I’m angry at myself for that. I wanted to bring something new because I knew I could control Niall.

“I was much lighter than him but you saw how I controlled the ring. I wanted to show more stuff but he was too hittable. He was easy to hit so I just went with my guts, I blasted him out to force the stoppage. I beat Niall at maybe 60% of me. I wasn’t shook up once. It was a very easy fight.

“Critics? I love you. Critics made me. They made me better. I will make you into my army. I will keep winning, I’ll have 10 fights and 10 KO’s. Tom Little is next for sure. He should fight me. He is a cool guy; he is a warrior. It’s going to be a very fan friendly fight. The fans want to see it so lets get in the ring with Tom Little. I do all of this for my fans. I get so much love from my fans. Every single one of them is a part of my success.”