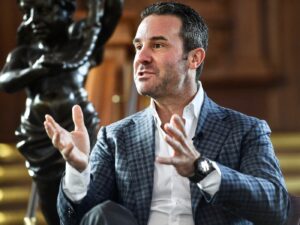 Todd DuBoef, Tyson Fury’s co-promoter, was speaking to Sky Sports about Tyson Fury, Anthony Joshua and Deontay Wilder and what the short term future holds for them.

“There is a gravitation to bring the titles together, and that would be Joshua and Fury. Obviously we would have loved to do that before the end of this year, but for the pandemic. I don’t think anybody is wavering from that objective,” DuBoef told Sky Sports.

“Both guys have great personalities, they can fight, and it is overdue. Let’s get it done. It would be the biggest fight in the history of the UK, for sure. In order to be a really big fight you have to have a large gate; for example Floyd Mayweather vs Manny Pacquiao did $70 million at the gate. I don’t know what the world will look like in spring 2021. What will the economics look like? We need to see how things change. But it’s as big a fight as anything I’ve seen in the sport.” 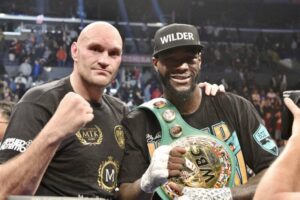 As the conversation moved on to Wilder (who has a rematch clause for a third installment).

“We’re looking at December 19, obviously Vegas is one of the places which is a high priority to do it in,” DuBoef said. “That’s where we are. We have been flexible and fluid in the entertainment and sports business. It is important to be patient, play it out, make sure it happens at the right time. That looks like a nice date in December to target it. It is a fair date to earmark, to give us time to put everything together. Everybody has been frustrated, not just Fury, Wilder, Joshua or Pulev. All the athletes have.

“We’re all trying to work with what our jurisdiction is, work with what our restrictions are, to get the guys back in the ring as quickly as possible. I speak to PBC [who advise Wilder] – we are all looking at that date. Nobody wants a false start. Deontay and Tyson have such big personalities – get them riled up and you can’t stop the train rolling. Fury has blossomed into a wonderful heavyweight but Wilder has dynamite in both hands. You can never blink or take him lightly because, in one second, it can be over.”