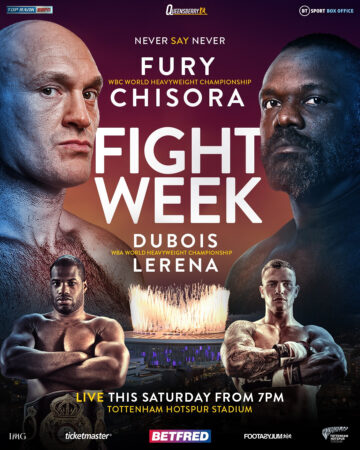 Four days to go until it is Tyson Fury time again, when the Gypsy King will rock up at the Tottenham Hotspur Stadium to take on his old rival Derek Chisora for the WBC world heavyweight championship.

There is heavyweight action at the double, because the WBA champion, the hulking Daniel Dubois, will be making a first defence of his title against the South African challenger Kevin Lerena.

The supporting cast to the heavyweights is now in place and, in what is a special attraction, there is a cracking fight for the EBU and WBO International lightweight titles between the vastly experienced French champion Yvan Mendy (47-5-1, 22 KOs) and his unbeaten challenger Denys Berinchyk (16-0, 9) from Ukraine.

Frank Warren and Queensberry in association with K2 Promotions are proud to provide a platform for Berinchyk to resume his career while the devastating invasion of his homeland continues.

Berinchyk is part of Ukraine’s Class of 2012 along with Vasiliy Lomachenko and Oleksandr Usyk, winning silver at the London Olympics. Famed for his spectacular ring entrances, Berinchyk has even tried his hand at bare knuckle boxing, where he defeated former UFC Fighter Artem Lobov via TKO.

“In March I had to stop my boxing activity and joined the team of volunteers who helped our troops and people in hot points,” explained Berinchyk. “We’ve been to many places very close to the front. It was not that easy to get back to the gym after everything, but I understood that Ukrainians need all kinds of wins, so I couldn’t miss a possibility to raise the Ukrainian flag in a European ring.”

For his part, Mendy is hoping that Berinchyk is coming to make a fight of it after being frustrated by slick movers in big fights previously.

“I have five losses on points,” said Mendy. “Three of my opponents competed in World Championship fights. Campbell, Postol and Tatli. These three boxers beat me on points, at home, and by fleeing the whole fight.”

Two of Queensberry’s Blue Chip prospects also feature on the card, with teenage prodigy Royston Barney-Smith (3-0, 1) having his fourth four rounder against the Nicaraguan Cruz Perez (3-3-1, 1), known as ‘The Pitbull’. Future light heavyweight Karol Itauma (8-0, 6)  has his ninth professional fight against the Slovakian Vladimir Belujsky (12-5-1, 8) – AKA Big Bad Vlad – who is based in Ireland.

“It is fantastic, I couldn’t ask for anything more from my promoter and manager Frank,” said Barney-Smith. “He is getting me on these top shows and is also doing a fantastic job promoting me and getting my name out there.”

“I am just blessed and grateful for the opportunities I have been given,” added Itauma. “Honestly, two Tyson Fury cards in one year is a blessing and I am going to take the opportunity with both hands.”