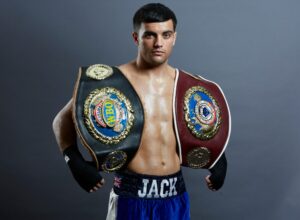 Jack Catterall is on a Las Vegas spying mission as he plots to become World Super-Lightweight champion.

The winner has vowed to face WBO mandatory contender Catterall next after the Chorley man agreed to step aside and allow all four belts to be at stake in boxing’s capital.

Catterall, who boasts a pristine 100% record with 26 wins, no losses and no draws, said: “I’m excited to be here for fight week.

“It is a massive fight, hopefully it is a good fight and I can let everyone know I’m serious about fighting the winner.

“I will do some training, sparring and ultimately watch the fight. After the weekend we will have a clear direction of where we’re going.

“I stepped aside on the promise that I will get the winner and I am under no illusion because anything can happen, but ultimately I have allowed them to create this big undisputed title fight.

“I have beaten everyone in front of me, done everything asked of me on my side.”

Catterall, 27, believes that a Taylor win will set-up a huge England v Scotland battle, but has doubts about Ramirez keeping his word if he triumphs.

“I hope Josh wins and hope he is a man of his word” added Catterall, who will spend two weeks in Las Vegas training.

“It’s been talked about Taylor having a homecoming fight at Edinburgh Castle and I am bang up for the challenge.

“I could be wrong and I hope I am wrong, but I don’t think Ramirez will give me an opportunity. I think he probably has other plans.

“Taylor has publicly thanked me for stepping aside and allowing this big fight to happen. Hopefully he can get the job done and we can get it on.

“I have been very patient and it’s been a long time coming, but I will be getting my crack.

“I’ve said it from the start, I think Taylor wins.

“Ramirez has improved, but is one dimensional. He has a big heart, will come forward but he is up against a southpaw mover who can get stuck in. He will face problems.

“Every meaningful fight I’ve had has been on the road. Tyrone McKenna I went to Belfast, Tom Stalker we were in Liverpool and Tyrone Nurse in Leeds.

“I don’t mind travelling and Edinburgh for a scrap would be brilliant. I have already planned English drummers to walk me out.”