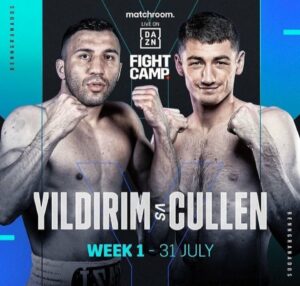 Jack Cullen says he will take full advantage of a golden opportunity when he clashes with former World Title challenger Avni Yildirim for the IBF International Super-Middleweight Title on the first week of Matchroom Fight Camp in Brentwood, Essex on Saturday July 31, live worldwide on DAZN.

After a fiery build up in the Matchroom bubble, Cullen recovered from a first round knockdown to hand undefeated prospect John Docherty a first career loss in their British Super-Middleweight Title Eliminator last time out in November at The SSE Arena, Wembley

Turkish star Yildirim (21-3, 12 KOs) heads into battle on the back of an unsuccessful challenge against pound-for-pound king Canelo Alvarez in February at the Hard Rock Stadium in Miami. Mexican icon Canelo was too good as he defended his WBC and WBA Super-Middleweight World Titles via a third round stoppage.

“John Docherty got the fight going at the end of the day – he started with his mouth and it made more people tune in,” said Cullen. “This is what boxing is all about, it’s all about having exciting fights. It was a good fight and I came home with the win. I was expecting to. I don’t want to take anything away from John Docherty – he’s a good boxer but I’m bigger and better.

“I don’t feel like I’m an underdog in this one. If anything I’m the favourite! He has been in with the best. You’ll see on fight night that I should be up there as well. You can’t really go off Canelo, he’s a superstar isn’t he. Whoever he fights he beats! All I can take away from it is Yildirim is a tough and strong lad.

“He comes for a fight. It can only be an exciting scrap. Everyone knows I enjoy getting involved in a fight. He enjoys a fight too. No matter what time it is in the ring, whatever round it is, we’re going to clash. It’s going to be a brilliant fight for the crowd and for those watching on DAZN.

“At the end of the day he’s a fighting man and he doesn’t want to get beat. Anybody that gets into the ring doesn’t want to get beat. He’s going to give it his all and I’m going to give it my all. You don’t look past anybody, and Yildirim shouldn’t be looking past me. We’ll prove to everyone how good I am. You’ll see my hand getting raised at the end of the night.

“This is going to be a dream come true for me hopefully. You never know, anything could happen after this. It’s entirely up to Matchroom and DAZN. Get past Yildirim and it puts me right up there. I think he’s ranked at number 21 or 22 in the world. There’s no reason not to be putting me up there.”

Cullen is no stranger to Fight Camp having been part of the first incarnation last year when he drew with Zak Chelli behind closed doors in August, and the fan-friendly 27-year-old says he will only benefit from the return of live crowds as 300 boxing enthusiasts pack into the stunning Matchroom HQ grounds.

“You couldn’t be fighting in a better place than Eddie Hearn’s back garden. I got 25 tickets and I’ve sold them all. Especially with a crowd this time, it’s going to be mega. I love all of the people who come and support me. They all put their hard-earned money into coming to watch me. It’s the same this time. They’ve all spent big money on the tickets. Crowds definitely help a fighter.”