Jack Massey: I’ll get the stoppage 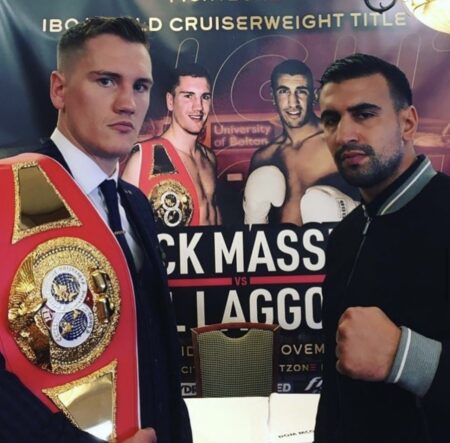 It’s make or break for Jack Massey this Friday (November 26), with the big cruiserweight in the biggest fight of his life against Bilal Laggoune for the International Boxing Organisation (IBO) World Title, live on Fightzone.

The pair will meet at a packed-out Bolton Whites Hotel in a feverish atmosphere that will see the winner move onto – potentially – unification fights, and whoever comes second-best going back to the drawing board.

A former top amateur that included two ABA Title wins, Jack turned over in 2013 and in that time has racked up 18 wins, nine KOs, and just the one – contentious – defeat to touted Londoner, Richard Riakporhe. Aged 28, Massey, still has it all to play for but knows the fight with Laggoune represents his big chance to break onto the world scene. ‘One Smack’ has worked with various promoters but since signing with Dennis Hobson and Steve Crump’s Fight Academy earlier this year, the fighter from Marple has picked up the IBF European belt and now gets a shot at world honours.

Laggoune is best known to British fight fans for his losing effort against Northern Ireland’s Tommy McCarthy in October last year for the EBU crown. The fight was a close affair – with one judge having it a draw – but the cards were stacked in McCarthy’s favour, taking place on UK soil and with Laggoune accepting the fight at short notice. Make no mistake though, the Belgian can fight with just two losses from 29 outings, and 14 KOs also proving that he carries a dig.

Jack and Bilal met for the first time weeks ago at a press conference to announce the show. Now, with the first bell imminent, the Brit says his opponent exudes confidence but that won’t be enough to get him through the fight.

“He comes across as a professional and there was no hate between us,” stated Jack. “He’s fresh and he wants it; he’s not at the back end of his career, and he’s hungry. He seemed like a confident guy, but you’ve got to be confident if you’re getting in and fighting for a world title. If you’re not confident in your own abilities then you might as well hang the gloves up.

“Bilal’s a good fighter. He’s been around, has fought world level guys and he’s no mug. He’s got all those boxes ticked. It’s going to be a difficult fight but I believe I’ll get on top of him and probably get a stoppage.

“I believe I’ll outbox him from the beginning; he’s quite square on and open down the middle. I’ll box him at first, start catching him and when he’s there to be hit, turn the power up and get the stoppage.

“I just can’t wait, I’ve sold hundreds of tickets and the atmosphere is going to be amazing. Time seems to be going slow but it’ll be here before I know it. I’m excited and nervous, a bit of both, if anyone says they don’t get nervous, they’re full of ****! I need those nerves though to get me switched on and alert, and I’ll be ready to bring home that world title.”