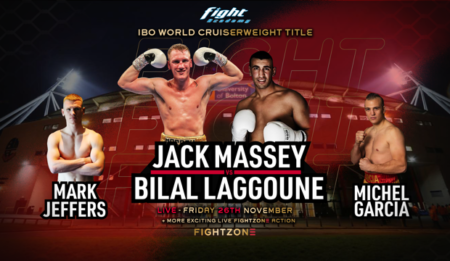 Fight Academy’s Jack Massey gets the chance of a lifetime on November 26 when he faces Bilal Laggoune for the International Boxing Organisation (IBO) World Cruiserweight Title, at Bolton White’s Hotel – live on Fightzone.

This is a massive opportunity for both men. The IBO version of the world title has previously been held by top fighters including Antonia Tarver, Tommy Hearns, James Toney, Mairis Briedis and Marco Huck – and the winner can expect to be involved in huge unification contests further down the line.

Massey has lost just once in 19 fights – a contentious British Title defeat to the highly touted Londoner, Richard Riakporhe, in 2019. Since then, ‘One Smack’ Jack has put together a brace of wins, including picking up the International Boxing Federation (IBF) European belt in his last fight in July.

Laggoune represents the Brit’s biggest challenge to date. The same age as Massey, 28, Laggoune has fought ten more times than his counterpart – with just two reverses in 29 bouts – and been in with decent operators. The Belgian also has heavy hands, having knocked out 14 men in the opposite corner, and is coming in off the back of a debatable ‘away from home’ decision loss to top-rated Tommy McCarthy for the European Title in October last year.

Massey knows this is a fabulous opportunity provided by his Fight Academy promotional team, with a win meaning he leapfrogs his domestic rivals onto the world scene.

“I’ve had a little look at him and he’s a very good opponent. I saw him box McCarthy and the decision was a bit ‘hit and miss’, it was very close.  He’s excellent opposition and this can only be a good fight.

“He’s definitely the best I’ve faced so far but, with the world title on the line, I’m training harder than I ever have before and believe I’ll go out and do a proper job on him. This is why I’m boxing and I intend to make a big statement.

“It would be amazing to win the IBO belt. When you look at the people that have held [a version of] it over the years like Anthony Joshua, Usyk has just won it from Joshua, Klitschko, Pacquiao, Floyd Mayweather – the list goes on for ever. All the big names at different weights have fought for it, and it’s a great title to have.

“It would be absolutely massive to win it; it would open up some huge doors and could lead to unification fights against some big names.  The night will be amazing, headlining on Fightzone, we’ll sell the place out and the atmosphere will be incredible.”