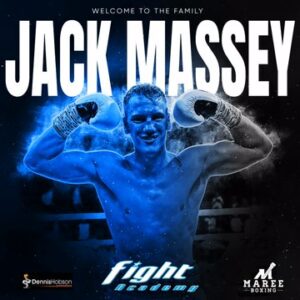 Previously with Queensbury Promotions, the 28-year-old former British Title challenger will get straight down to action with a shot at the IBF European Title on July 2 in Sheffield, live on new boxing platform Fightzone.

After a stellar amateur career that saw him win the Senior ABA Title and notch up wins against current British stars like Joshua Buatsi and Chris Billam-Smith, Jack turned over in 2017 and went 16 fights unbeaten before losing a competitive fight for the Lonsdale Belt against highly-rated Londoner, Richard Riakporhe.

Since then the fighter from Buxton known as ‘One Smack’ has got back to winning ways with an eight rounds runout in December last year, leaving him sitting pretty at 17-1 (8). Ahead of his Fight Academy debut, popular and well-supported Massey says he believes that Fightzone viewers will get to see the business-end of his career.

“I’m absolutely buzzing. I’ve seen the production, with the back to back shows and it looks amazing. I’ve got other lads in my gym like Charlie Schofield with Fight Academy, and I’ve seen what they’ve done with him, getting him a title fight straight away. I went down for a meeting with Dennis and the guys and it’s great what they’ve offered me.

“Part of the attraction is the amount of shows they’re putting on, and I need to get our more regularly. I’ve had some bad luck with my career and it’s not gone exactly the way I’ve wanted it to, but they’ve got me straight into a title fight, which is great. That just shows how good Fight Academy are – bang, straight away getting me a big fight!

“I would like to fight for the British Title again. We’ll see what happens, there are lots of options out there but I’m just excited to get the chance to get some solid momentum with Fight Academy and show the Fightzone viewers what I’m all about.”

Manager Kev Maree, said: “Jack became a free agent and we had lots of options but I was really excited by the plan and vision of Fight Academy. Like me they believe Jack is a future world champion and they will do everything to give us the fights and platform to facilitate that.

“I’ve been blown away by the quality of the shows in the Fightzone Arena. It’s up there with the best I’ve seen. They are modern, fun, current, and I think the future of where boxing shows are headed.”