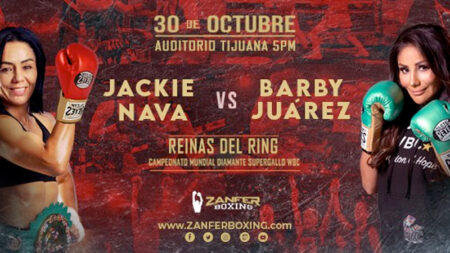 After all of these years, the clock is ticking down to this Saturday night, when two of the greatest legends of women’s world boxing, Jackie Nava and Mariana Juárez, finally clash in the ring of the Municipal Auditorium of Tijuana.

Zanfer is promoting this extravaganza and it`ll be broadcast by Azteca 7. So, thus and accordingly the prophecy will be fulfilled, as “Princesa Azteca” Nava (38-4-4, 16 ko’s) and “Barby” Juárez (55-10-4, 19 ko’s) will collide in a 10 rounds thriller at Super Bantamweight, with the WBC Diamond belt at the stake.

Winner of 10 world championships in two divisions, Jackie Nava, and world champion in three divisions and protagonist of 29 world title fights, Mariana Juárez, will star in one of the most anticipated fights in the history of women’s boxing.

The fight has divided opinions and there is no clear favourite. Jackie’s boxing, technique and speed, offset against Mariana’s power, aggressiveness and rhythm, in a fight that guarantees constant action and welling emotion, as one winner will emerge.

The spectacular battle of legends between Jackie “Princesa Azteca” Nava and Mariana “Barby” Juárez will also have a very attractive undercard.