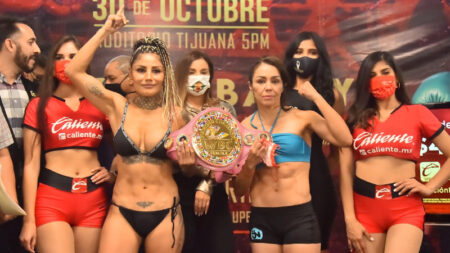 Saturday night, two of the greatest legends of women’s world boxing, Jackie Nava and Mariana Juárez, will fight at the Tijuana Municipal Auditorium, in a card presented by Zanfer and which will be broadcast by Azteca 7 and SPACE.

Winner of 10 world championships in two divisions, Jackie Nava, and world champion in three divisions and protagonist of 29 world title fights, Mariana Juárez, will star in one of the most anticipated fights in the history of women’s boxing.

Between them, they have notched up forty-three years of professional boxing for 115 fights, 864 rounds, 54 world championship fights, including three Diamond Belts, and most importantly, 14 world championships victories, in five divisions.

This Friday both passed the official weigh-in. Nava weighed 120.3 pounds, while Juarez was 120.8 pounds.