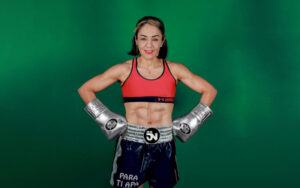 Jackie Nava tops the extravaganza that Zanfer will present on Saturday, March 20, at the Grand Hotel Tijuana, behind closed doors.

Starting what will be the twentieth year of her boxing career, Jackie has been very active. Last year, she defeated Estrella Valverde and Marisol Corona by unanimous decision, and in 2019 she drew against Argentine Marcela Acuña. She hasn’t fought in her native Tijuana since November 2018, when she knocked out Venezuelan Carolina Álvarez in seven rounds.

Her rival, “La Bella” Fernández, is a boxer of great quality, speed and endurance. Although there are five defeats on her record, none have been by knockout, and four of them have been against first-level rivals, namely world ranked Victoria Torres, current WBC Super Bantamweight world champion Yamileth Mercado, Peruvian Linda Laura Lecca in dispute of the WBC Superfly world championship and before the current world champion, Lourdes Juárez. The other defeat was in her debut.

In her most recent fight, last December, she defeated María Guadalupe Vera, in Chihuahua, by unanimous decision in eight rounds.

On the undercard, prominent Baja California prospects will take part, and in the next few days the backup fights will be announced, which will also be broadcasted by Azteca 7.

Zanfer’s card, at the Grand Hotel Tijuana, will be behind closed portals, and the prevention and sanitation protocols of the health authorities and the Tijuana Box Commission will be strictly followed.