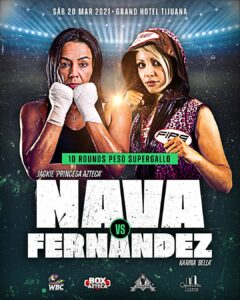 Starting the twentieth year of her boxing career, Jackie has been very active. Last year, she defeated Estrella Valverde and Marisol Corona, and in 2019 she drew against Argentine Marcela Acuña. She hasn’t fought in her native Tijuana since November 2018, when she knocked out Carolina Álvarez of Venezuela in seven rounds.

Jackie debuted on May 29, 2001, in Hawaii, and she beat Vicki Cozy. It is not ruled out that she can get to fight Mariana “Barbie” Juárez, or contest the world bantamweight or super bantamweight championship.

Her rival, “La Bella” Fernández, is a boxer of quality, speed and endurance. Although in Fernández’s record there are five defeats, none have been by knockout, and four of them have been against exceptional rivals, namely world ranked Victoria Torres Cupul, the current world champion Yamileth Mercado, the Peruvian Linda Laura Lecca in dispute of the WBC Superfly world championship and against the also current WBC champion Lourdes Juárez. The other defeat was on her debut.

In her most recent fight, Fernández defeated María Guadalupe Vera in Chihuahua by unanimous decision in eight rounds.

The fight is promoted by Zanfer and will be televised by Azteca 7.

Dillian Must Prove He Can Shift The Rock of Gibraltar…and Alexander! Matchroom Media Release ‘Next in Line’ Okolie Feature