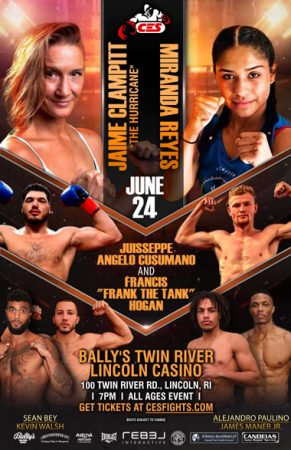 When she made her boxing debut 22 years ago at the age of 23, Jaime Clampitt never envisioned she’d still be fighting in her mid 40s, yet here we are, just weeks shy of her 46th birthday preparing for her 32nd pro bout.

And there’s still no end in sight.

“The Hurricane” faces Texan Miranda “El Alacrana” Reyes in an eight-round lightweight bout, which, Clampitt says, is just another step in the right direction as she continues her comeback following an eight-year absence between 2013 and 2021.

Having watched the recent surge in exposure for women’s boxing – punctuated by the Amanda Serrano-Katie Taylor lightweight world championship bout in May that not only sold out Madison Square Garden, but also drew an unprecedented audience of 1.5 million watching globally on DAZN, setting a new women’s boxing viewership record – Clampitt is looking to cash on her two decades of experience in the game.

The timing couldn’t be better. As Clampitt reflects on the 15-year anniversary of her groundbreaking win over female boxing icon Mia St. John in 2007, she’s cognizant of the six- and seven-figure purses promoters are now dishing out for female fighters, which hasn’t always been the case in the battle for equal pay in professional boxing.

“Even when I was at the top of my game, females weren’t getting paid close to what they deserve,” said Clampitt, who now lives in Warwick, RI, where she co-owns co-owner of On the Ropes Boxing and Fitness.

“That is one of the reasons I’m coming back. The Serrano-Taylor fight was incredible, and I think I deserve that. I’ve been around the sport a while. I’m a pioneer in boxing. The pay for females is a lot better now, and I think you will see more females coming out of retirement for that reason.”

Tickets for Summer Splash are available at CESFights.com. In addition to the Clampitt-Reyes bout, the card features the Ballys debut of unbeaten super middleweight and 6-foot-2 southpaw Francis Hogan of Weymouth, MA; and the long-awaited return of hard-hitting Sicilian heavyweight Juiseppe Cusumano.

Clampitt, per usual, continues to generate industry buzz following her February victory over Kim Wabik, her first win since 2013. While athletes competing into their mid-40s isn’t as earth-shattering as it might’ve been 20 years ago (see Tom Brady, for example), Clampitt’s comeback seemingly came out of nowhere. She had been retired for nearly a decade, launched her own business, and was inducted into the Hall of Fame in 2020 before the desire to compete lured her back into the ring.

Conditioning was never an issue. As the owner of a boxing gym who teaches classes on a regular basis, Clampitt is always in shape, plus she switched to a vegan diet 10 years ago, which helped her deal with muscle inflammation and recovery. The only question was whether she could still compete at the level she had grown accustomed to during her Hall of Fame career. In her first fight in nearly a decade, she faced a tall order against fellow Canadian and 39-fight vet Olivia Gerula on June 19 in Rhode Island, fighting to a six-round draw.

When asked if there’s a way to tell midway through a fight that it’s perhaps time to hang up the gloves for good, Clampitt said, “Honestly, I don’t know – it hasn’t happened yet.”

“The first time I went back out there last summer, I was like, ‘Can I still do this?’ Having that kind of layoff, I didn’t know what to expect,” she continued. “A fighter can get old at any time. And I was fighting someone pretty tough for my first fight back. All things considered, I was pretty happy with it.

“As long as I wake up each day feeling the way I do, I’ll keep going.”

Clampitt is living proof dreams can come true at any age. She recalls turning pro in 2000 and telling her coach she one day wanted to box St. John, who at the time was climbing the ranks under the guidance of Top Rank Boxing (she was 14-0 when Clampitt made her debut) and receiving additional press outside the ring from her pictorial in Playboy magazine.

“He said to me, ‘That will likely never happen,’” Clampitt recalled.

Analysts were critical of St. John’s résumé and often balked at the idea she could compete with top-level talent. In 2002, St. John fought Christy Martin, one of the sport’s most accomplished champions, and went toe-to-toe with the “Coalminer’s Daughter” despite many predicting she wouldn’t make it past the first few rounds. Five years later, Clampitt earned her dream match with St. John at the Convention Center in Providence and won convincingly by unanimous decision to capture the IWBF world lightweight title. In 2012, St. John beat Martin in a rematch at 154 pounds to capture the WBC world super welterweight title, ending Martin’s career after 59 bouts. St. John eventually retired in 2016, winning 49 of her 64 bouts over the span of 19 years.

“When I finally got the opportunity to fight her thanks to [promoter] Jimmy Burchfield and CES, it was such a huge moment for me,” Clampitt said. “I really wanted to fight someone with a big name in the sport.

“A lot of people in the beginning had a lot of negative things to say about Mia, but she fought all the best fighters and deserves a lot of credit. People eventually started to see that. By the time I fought her, she had [52] fights under her belt.

“Jimmy has always supported female boxing,” Clampitt continued. “He had no problem booking me as the main event multiple times, and I was always grateful for that.”

Years later, nothing’s changed. Clampitt is once again headlining a CES event under Burchfield’s guidance. The only difference is now she’s a bit older and a lot wiser, living out a dream even she didn’t think would be possible at this stage in her career.

“Athletes in general are just in a different place now,” she said. “We’re learning more, we’re more educated, and we train differently. For me, to prove I can do this and, hopefully, inspire others to continue with their goals, is enough to keep me going.”