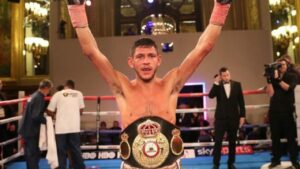 The native of Doncaster, Yorkshire, had a professional career that spanned from 2005 to 2019. He made his debut at the age of 19 and gradually worked his way up thanks to his good boxing style, courage and desire to improve.

McDonnell announced his decision through a post on his Instagram account and thanked the fans and those who stood by his side during his years as a fighter. The last time he stepped into the ring was in 2019 and he was considering fighting again but then said that he considered it was too late for that and decided to put an end to his excellent career.

He was English Champion, British Commonwealth Champion, European Champion, IBF Champion and also WBA Champion. On May 31st, 2014 he first won the pioneer body’s Bantamweight title by defeating Tabtimdaeng Na Rachawat by TKO. He made six defenses of that belt until he lost it to Naoya Inoue in 2018.