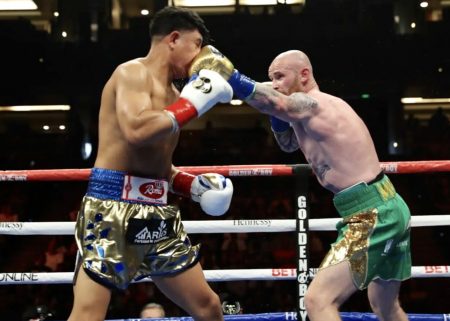 Former world champion and undefeated Mexican super-star Jaime Munguia (40-0, 32 KOs) returned to Anaheim’s Honda Center as he took on former world title challenger Jimmy “Kilrain” Kelly (26-3, 10 KOs) of Manchester, UK. The scheduled 12-round super middleweight fight started off slow as Kelly maintained his distance and waited for Munguia to attack, a strategy he continued throughout the fight. Happy to be the aggressor, Munguia landed strong power punches as Kelly tried and often failed to counter. By the fifth round, Kelly, desperate, began a display of holding; Munguia attacked, dropping him three times to be declared the winner by knock-out at the 2:57 marker.

“It was difficult in the beginning since he’s a slippery, tough fighter, and he could take a punch,” said Jaime Munguia. “He was trying to do his plan of attack, but I had to do my thing and work the body. My mentality was that I was losing the first three rounds. So I had to follow my plan of slowing him down by attacking the body. I figured out that I had to work through the middle and throw punches like the uppercut. I think it was the punch that I knocked him down with.”

Munguia continued, “I think this fight helped me out a lot. I’m ready to go back to 160 to fight for a world title or move to 168. I’m ready for any challenge. There are a lot of people who are supporting me. I want to say what Oscar said for Charlo to grow some balls and stop hiding behind Haymon. I think it would be great for boxing. We hope that by the end of the year we can get a big fight.”

“My strategy was to move and try to frustrate him,” said Jimmy Kelly. “He’s a strong, patient fighter. But, he just stayed calm and found the opportunity. It was my daughter’s birthday and I missed it which broke my heart. I thought I would win but now I have to go back and explain why I lost.”

The pride of Chihuahua, Oscar Duarte (23-1-1, 18 KOs), returned to fight in the US for the first time since 2019 against Mark “Machete” Bernaldez (23-6, 17 KOs) of Cotabato, the Philippines. The 10-round co-main event was a crowd pleaser as fighters willingly exchanged blows. However, Duarte proved to have more power as he knocked out Bernaldez at 2:05 of the fifth round.

“It was a tougher fight than I expected,” said Oscar Duarte. “I followed my team’s plan and got the results I was looking for. My opponent was very resilient, he took a lot of my shots but I stopped him in the end. I look forward to fighting more this year. Thank you to everyone who supported me.”

“I feel very excited to be defending my title in my US debut on the great platform DAZN,” said Yokasta Valle. “Thank you to everyone that supported me; I’m representing all Latinos tonight. [The fight] was last minute for me as well, but like a true champion, you have to be ready. What I’ve always said is that I want to fight against all the other champions. I want to unify even if it’s against Seniesa [Estrada]. I want to fight all the champions.”

Carlos Ortiz (13-5, 13 KOs) of Torreon, Mexico, put on a great performance and scored an upset victory against Evan Sanchez (11-1, 6 KOs) of Parlier, CA. The fighters went toe-to-toe in their 8-round super welterweight event, but the fight didn’t go the distance. The fighters were exchanging blows when Sanchez got caught and Ortiz put the pressure on, dropping Sanchez on the canvas and ending the fight at the 2:59 marker; winning the fight via knock-out.

“I feel extremely happy and proud of my team,” said Carlos Ortiz. “I never imagined winning that way. I have no words to explain how happy I am. I’m not going to retire, I’m going to continue. My plan was to be smart, get in the inside and make sure I take him to the ropes. He would throw a hook, I would throw mine and that’s how I got him. I knew he was courageous and I knew he was going to go toe-to-toe with me but I was the stronger fighter tonight. Thank you! I will be here for a while. Long live Mexico!”

The Golden Boy Fight Night: Munguia vs. Kelly Prelims was headlined by Carlos Ocampo (34-1, 22 KOs) of Ensenada, Mexico, as he defeated Vincent Rodriguez (40-11-1, 21 KOs) of Buenos Aires, Argentina, via knock-out at the 2:06 marker of the first round. The middleweight fight was originally scheduled for 8-rounds.

“I felt very good and strong,” said Carlos Ocampo. “I expected him to show more resistance but I am glad we got a good result today. I see myself fighting big names in the future.”

“Pin-Pon” Reyes (8-0, 5 KOs) of Mexicali, Mexico dominated Moises Flores (25-7-1, 17 KOs) of Guadalajara, Mexico stopping him in the second round via KO of a 6-round super lightweight fight. Reyes dropped Flores with a straight 1, 2 at the 0:50 marker of the aforementioned round.

“My team told me to calm down the first round and let him come to me,” said Pin-Pon Reyes. “Yes, I had to adjust because he was an awkward fighter. If you listen to your corner, you’ll get the job done. It’s a great experience to fight in the Golden Boy card, it’s the whole package. The opportunity shows itself and we have to take advantage of it.”

Norwalk’s Japhethlee Llamido (8-0, 3 KOs) outboxed Saul Hernandez (17-16-1, 12 KOs), resulting in an unanimous decision victory. Llamido was picking shots throughout the 6-round lightweight event, winning via unanimous decision with scores of 60-53.

“It was a good fight, he gave me the rounds I needed,” said Japhethlee Llamido. “I don’t want any first round knock-outs. I want to go the distance. In training camp we work hard for anybody. A lot of people try to study me and think pressure can stop me but I’m ready for that. I’m a fighter. We like the pressure. We just have to adjust to every opponent like we did today.”

Opening up the fight night, Jorge Estrada (3-0, 3 KOs) of Mexicali, Mexico, stopped Hassan Coleman of Los Angeles, CA (0-1) with an uppercut to the body after the fighters exchanged a series of punches. Estrada won via knock-out with a time of 1:51 in the first round of a 4-round super welterweight bout.

“I felt very strong, I had a great preparation and I’m very proud of my team,” said Jorge Estrada. “My opponent had a heavy hand but he needed more to get to me. I’m going to keep working hard and give you guys some more fights this year.”

Munguia vs. Kelly was a 12-round super middleweight fight presented by Golden Boy in association with Zanfer Promotions and ProBox Promotions. Valle vs. Villalobos was a 10-round fight for the IBF Minimumweight World Championship, presented by Golden Boy in association with MarvNation. The event was sponsored by Hennessy “Never Stop. Never Settle,” and “BetOnline – Your Online Sportsbook Experts.” The fight took place on Saturday, June 11 at Honda Center in Anaheim, CA.