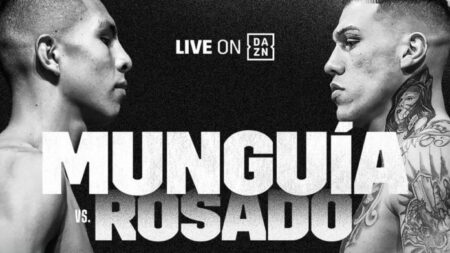 Jaime Munguia (37-0, 30 KOs) and the fearless “King” Gabriel Rosado (26-13-1, 15 KOs) hosted a virtual press conference today in anticipation of their upcoming Mexico vs. Puerto Rico brawl at Honda Center in Anaheim on Saturday, November 13. The 12-round middleweight bout for the WBO Intercontinental Middleweight championship will be streamed live exclusively on DAZN worldwide, excluding Mexico, starting at 6:00 p.m. PT/9:00 p.m. ET.

Below is what the fighters and attendees had to say to Golden Boy Fight Night’s Beto Duran.
#MunguiaRosado Virtual Press Conference
ANAHEIM, CA (October 6, 2021) – Jaime Munguia (37-0, 30 KOs) and the fearless “King” Gabriel Rosado (26-13-1, 15 KOs) hosted a virtual press conference today in anticipation of their upcoming Mexico vs. Puerto Rico brawl at Honda Center in Anaheim on Saturday, November 13. The 12-round middleweight bout for the WBO Intercontinental Middleweight championship will be streamed live exclusively on DAZN worldwide, excluding Mexico, starting at 6:00 p.m. PT/9:00 p.m. ET.

Below is what the fighters and attendees had to say to Golden Boy Fight Night’s Beto Duran.

“Everyone at DAZN is very excited about the main event. It’s going to be an all-out war between two of the toughest men in the sport. At only 24 years of age, Jaime has rapidly risen through the ranks and defeated some of the best on his way to the top of the division. You’ve only got to look at his incredible knockout to win ratio at 81% and the resume of opponents that he’s fought, that he’s a world championship level fighter and one that we are very confident will be in the pound for pound conversation very soon.

“His opponent in Gabriel Rosado is as tough as they come. There is no doubting it. We’ve watched him on DAZN several times what a fierce competitor he is and how willing he is to step into the ring against any man in the sport, so we’re very excited to have him back on DAZN, and I’m sure he’s raring to go too. All in all, this is a fight you don’t want to miss. All of the action from fight week, as ever, all the way through to fight night itself, will be carried live and exclusive on DAZN, worldwide on DAZN, as part of what’s shaped up to be a blockbuster boxing schedule for us as we close out the year. We’ll thank Oscar, and we’ll thank the Golden Boy team for their partnership and their support and wish both camps the best of luck in their preparations. We look forward to seeing all of you come November 13.”

“For over 28 years, Honda Center has hosted world-class sporting events and great fights on and off the ice, and that legacy continues as we welcome back Golden Boy Promotions to Anaheim. On November 13th rising superstar Jaime Munguía takes on Gabriel Rosado live in this highly anticipated match. Tickets are available at ticketmaster.com, and we will see you on fight night here at Honda Center.”

“Rosado won, he won his lottery ticket in his last fight, you know when he knocked out Bek [Bektemir Melikuzie] Bek “The Bully. He had such a great knockout that, you know, everybody, the fans, everybody was clamoring for this fight.

“It’s the type of fight that Munguía needs to establish himself in that division. You know, in many ways, Rosado’s been around, and he’s got great experience. He’s kind of like the keeper at the gate in the middleweight and super middleweight divisions. This is a great example of records not really meaning anything because he’s always dangerous. If Munguía can get past him, this will establish him as one of the top players in the division.

“It’s always good. It’s always good to announce fights and get positive feedback. It’s not always the case. We always try to please the fans. I mean, that’s first and foremost. You want to please the fans and make the fights that they want. You got to kind of keep your ear to the ground and listen to the chatter and what they’re talking about. A lot of fans were talking about this fight after Rosado’s last win, they wanted this fight, and we heard them loud and clear. I’m just happy we were able to get it done. It’s going to be a great fight.

“[Gabriel Rosado] is as dangerous as they come. I mean, you know we’ve been working with him for many, many years, it seems like over 10 years. I just think back to all the fights where he was supposed to be an opponent, and he came out either with a draw or a win. He’s just that type of guy. The great thing about Gabe Rosado now, when you talk to him versus when we first started working with him over 10 years ago, is that he’s so much more mature. He takes everything a little more professional. His discipline’s better, his motivations are better. He’s got a family now, so that always seems to settle a fighter down. He’s always in shape. He’s always working out. Those are the guys that are dangerous. The guys that are always in the gym. The guys that are always ready to fight. Those are the most dangerous guys.

“You can see the progression in [Munguia]. He’s learning from one of the best, one of the masters, one of the greatest fighters out of Mexico in Érik Morales. He’s a multi-division champion, multi-champion. Who fought all the top fighters in the world. That experience, you can’t buy that experience. To have someone like that in your corner, the psyche that he has, the mindset that he has, it’s been great for [Munguia]. Munguia is still very, very young but having a guy like Érik Morales with him is a huge plus.

“Whenever you have Mexico versus Puerto Rico, whether it’s Mexican-American, whether it’s Mexican, whether it’s Puerto Rican America, you name it. It’s always going to be a fun fight. It’s always going to be a great fight. The thing about the Mexican fight fans is that they’re very educated when it comes to boxing, and they have a great deal of respect for the Puerto Ricans. Yes, they want to beat them, you want your guy to win, but they also know and understand the rich history of Puerto Rico. There’s going to be a lot of Gabe Rosado supporters there, too, believe it or not. Here in the L.A. area, he has won over the fans. They really, truly do respect him because he’s a warrior because he gives it his all because he’s in there to either try to knock you out or he will get knocked out. They love that whenever you have a fighter that’s that disciplined, that dedicated to his craft, that you can’t help but root for him. Yes, Jaime is going to be the favorite. Jaime is going to have the backyard fans that are going to be around for him, but don’t be fooled; Rosado’s going to have a lot of supporters as well. Rosado trains in Hollywood with Freddie Roach at Wild Card.

“Well, I think the last couple fights since I actually linked up with Freddie Roach, I think it shows. This is an improved Gabe Rosado. I have experience; I’m putting in the work. Yes, my record is deceiving. I wasn’t the guy with the machine behind me, with the big promoters, big management behind me, so a lot of times, I went into fights where the other guy was the favorite. And there have been fights that should have gone my way, where I got the shit-end of the stick. And it showed in the Danny Jacobs fight. I just saw that fight, and I was like, ‘wow, clearly I out-boxed him.’ But you know, that’s just the beauty of it, that the fans get to see it, and the fans at the end of the day can’t be fooled. I made a statement in my last fight, which I think will be ‘Knock Out of The Year.’ So we’re excited about this Munguia fight.

“I’m excited, but I am not going to give up the game plan, obviously. I want to do a little bit of everything. I’m going to bang, I’m gonna move, I’m gonna box, and I’m going in to win. I’m not just going to win on the scorecards; I want to get a knockout. I want to keep that momentum going because I think it’s important. These are the kinds of fights where it has to live up to the expectations of the fans. So you have to be a hundred percent, and you gotta be willing to be all in, in the ring. It will go down into the history books. This is one of the fights that they’ll be talking about 20 to 30 years from now.

“Bek was a two-time Olympian, I believe, 290 knockouts in the amateurs and was crushing his opponents in the pros. He was a big, strong, powerful guy, so that [win for me] was a statement. Munguia could have gone the easier route. He could have gone with his mandatory, so you have to respect the guy that says, ‘no, I want Rosado.’ He is willing to give the fans what they want, and that’s what makes this fight special, that t’s a fight that the fans asked for. In boxing nowadays, with the politics, it’s hard to give the fans what they want. This right here is just like an early Christmas gift for the fans. It’s gonna be lit.”

“Our strategy right now is to focus on working on my general boxing skills. Making sure I keep my distance, keeping my hands up. We noticed that Rosado had an excellent right punch in his last fight, so we want to prepare to prevent him from giving him that advantage. We have been working a lot on my speed and making sure I can move.

“Yes, I won a world title at 24. But also, all these years I have gained a lot of experience. I feel like my boxing has improved, and we are ready for bigger challenges. After Rosado, there has been a lot of talk about a fight with DOMANCHENKO, Jacobs, and Golovkin.

“This is going to be a fun night, a night full of punches. It will be a war. Everyone knows that Mexico vs. Puerto Rico are always great fights. I honestly see a very motivated Gabe Rosado. He is strong and willing to give a good fight. I can assure you that we will leave everything in the ring and bring something great on fight night.”

Tickets for Munguia vs. Rosado are on sale now and are priced at $250, $150, $100, and $50 not including applicable service charges. Tickets will be available for purchase at ticketmaster.com. Please note that California Department of Health guidelines and other protocols relating to admission requirements may be in place for this event, which may include a requirement that all guests show proof of a negative COVID-19 test or full vaccination status.