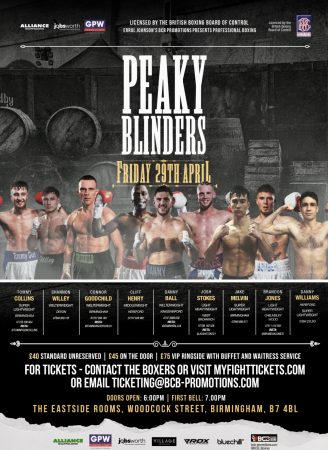 Jake Melvin is determined to prove it’s like father, like son when he begins his pro journey.

He makes his debut when BCB Promotions return to the Eastside Rooms, on Woodcock Street in Birmingham, with fight night set for Friday April 29.

The second-generation fighter is the son of Malcolm Melvin, growing up with his dad and family in the Brummie area of Kings Heath. He now lives in Stourbridge, with mum Katie.

Melvin Snr was a pro for 18 years, between 1985 to 2003, and became the Midlands super lightweight champion, also challenging for the British and Commonwealth titles.

Melvin Jnr started boxing at the age of 11, at amateur level, but had his last fight at 15, making it five years out of the ring for the 20-year-old, who will turn over at welterweight.

His amateur record stands at 12 wins from 16 bouts, with two runs to the semi-finals of the England Schools Championship, representing the Hall Green and Second City boxing clubs.

He’s also a keen footballer, but has put his boots to one side, while preparing for his debut. A wealth of experience will be passed down to him, with dad Malcolm operating as coach.

Jake said: “I may have had a big break from boxing, but I never really stopped training. I was playing football, so it helped with the fitness side of that.

“I’ve had a few weeks off football, as I’m involved with a Saturday team (AFC Bromsgrove, Stratford-upon-Avon Football Alliance). I didn’t want to take the risk of getting injured.

“Both me and brother (Malcolm Jnr) are good footballers. He’s been at Aston Villa, Notts County, Hednesford Town and a few other clubs.

“Malcolm (Jnr) boxed for a bit, too, as an amateur, but then decided to concentrate on his football. I think he had four fights and won two, so I’ve got more experience.

“Obviously, the reason we both took it up was because of our dad and I’ve decided to give it another go. It was my decision, I told him I was turning pro.

“I think I would have regretted it, if I hadn’t come back. If it doesn’t work out, at least I can say that I’ve tried, but there’s no reason why it shouldn’t.

“I was a decent amateur, as a come-forward pressure fighter, but I was quite small then and I’m about 6ft now, so I can keep my punches longer and use my jab more.

“It was a bit hard, at first, coming back to sparring and I’ve been in with some good lads, so I got a bloody nose once or twice, but my timing and reactions are on point now.

“Boxing is in the blood and I never considered having anybody else coach me for this than my dad. He’s been there and done the things that I want to do.”

Tickets for the Eastside Rooms bill are available, priced at £40 standard or £75 VIP ringside with buffet, directly from the boxers or by visiting myfighttickets.com.