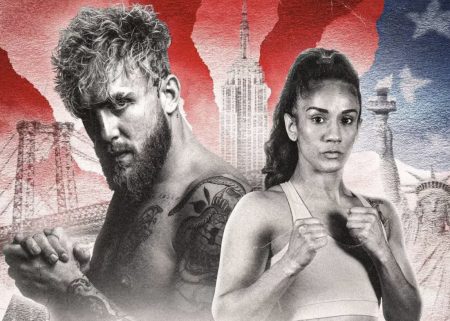 Renowned content creator and highlight maker Jake “The Problem Child” Paul, fresh off of his viral one-punch knockout victory in December, and Amanda “Real Deal” Serrano, the Unified Featherweight World Champion who is coming off one of the most significant matches in women’s boxing history, will headline in dual main events at Madison Square Garden on Saturday, August 6 live on SHOWTIME PPV in an event presented by Most Valuable Promotions (MVP). Opponents for the main event bouts are to be announced.

The Sports Illustrated 2021 Breakout Boxer of the Year, Paul (5-0, 4 KOs) will look to remain undefeated as a professional boxer and solidify his role as one of the sport’s most intriguing and talked-about fighters. A YouTube star and influencer-turned-pro boxer, Paul’s perfectly placed right hand in the sixth round against Tyron Woodley last December was the No. 1 trending video worldwide on YouTube the day following their December 18 bout. It retained its staying power with a No. 2 ranking two days later. The dramatic knockout also recorded 7.5 million views in less than 24 hours on YouTube, making it the most watched video in a 24-hour period in the history of SHOWTIME SPORTS®. The Cleveland native, who is just 25 and started his pro boxing journey in January 2020, is fighting out of Puerto Rico under the tutelage of Danny Smith and B.J. Flores.

“It has been one hell of a year already,” said Paul, a cruiserweight who will be fighting for the first time in New York City’s famed MSG arena. “I couldn’t have been prouder of Amanda when she went toe-to-toe against Katie Taylor in April and made history at MSG. Now, to be able to make my own history at the Garden and share the night with Amanda is just the epitome of the American dream. This is a special moment for the entire creator community and I promise I will once again show the world anything is possible.”

Having won titles in every division between 115 and 140 pounds, Serrano, a Puerto Rican southpaw from Brooklyn, holds the Guinness World Record for most women’s boxing world championships (7) won in different weight classes. Her narrow split-decision loss to Katie Taylor in a lightweight championship bout at Madison Square Garden was the first women’s fight in history to headline at MSG, and it delivered. Drawing a raucous, sold-out crowd of 19,187, Serrano (42-2-1, 30 KOs) nearly finished Taylor off with a barrage of punches in the fifth round. Now, Serrano will lace up the gloves for the second time this year and defend her WBO, WBC and IBO featherweight titles, which she last did in August 2021.

“I’m so blessed. To be headlining twice in less than six months at Madison Square Garden is something I could have never dreamed of,” Serrano said. “I’m so thankful to MVP, SHOWTIME and MSG for their continued support and believing in me every step of the way. I can’t wait for another opportunity to fight in front of my community surrounded by my fans and to continue to prove that women can do anything.”

“Amanda and Jake have become the most dynamic duo in professional boxing. As MVP athletes, they’ve both strived for greatness in their own respect and yet, continually work to build one another up not just as athletes but mentors and friends,” said MVP co-founder Nakisa Bidarian. “Watching these two grow immensely over the last year has been a privilege and to have them both headline as main events at the greatest arena in the world, is a special feat. We are grateful to Madison Square Garden and SHOWTIME for partnering with us on what will be a can’t miss night of boxing and a monumental accomplishment for the creator community.”

Paul will fight on SHOWTIME PPV for a third time after winning a split decision over Woodley in August 2021 and delivering a sensational Knockout Of The Year candidate in their rematch in December. Serrano returns to the network for the fifth time, and now her third pay-per-view, after winning unanimous decisions over Yamileth Mercado in August and Miriam Gutierrez in December.

“We are thrilled to welcome Jake and Amanda back in dual co-headlining bouts on SHOWTIME PPV,’” said Stephen Espinoza, President, Sports & Event Programming, Showtime Networks Inc. “Amanda and Jake represent two very different kinds of fighters—one is a sure-fire Hall of Famer with a litany of world titles on her resume, the other is a relative newcomer to the sport with a flair for the dramatic who has proven that he belongs. Despite their contrasting styles, they both make the sport more accessible and attractive to a younger and more diverse audience. When Jake Paul fights, he captures attention like few others, and we as a network have historically been the biggest proponent of women’s combat sports. We are proud to add this marquee event to a year filled with thrilling, world-class events from SHOWTIME—the global leader in live combat sports.”

The event is co-produced by SHOWTIME PPV and Most Valuable Promotions (MVP), a company founded by Paul and Bidarian on the premise that content is king, and fighters are the content creators in combat sports. Holden Boxing will be the licensed promoter for the event, and Paul and Bidarian will serve as executive producers. The pay-per-view telecast is produced and distributed by SHOWTIME PPV.