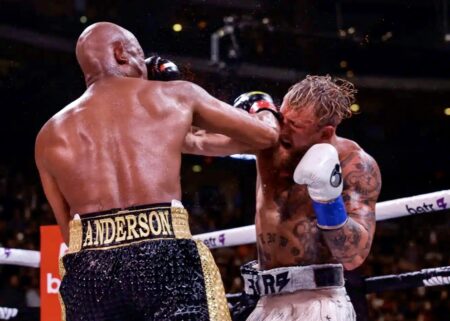 International superstar Jake “The Problem Child” Paul dropped and decisioned former UFC star Anderson “The Spider” Silva in a bruising, brilliant eight-round unanimous decision on Saturday, October 29 in a Most Valuable Promotions (MVP) event live on SHOWTIME PPV from Desert Diamond Arena (formerly Gila River) in Glendale, Ariz., just outside of Phoenix. The cruiserweight thriller took place in front of 14,430 fans in the highest-grossing boxing event for ticket revenue in the history of the arena.

Round after round, Paul solved the puzzle that is Silva, one of the greatest UFC fighters of all time, outworking the crafty veteran and dropping him with a looping overhand right for the second time in his boxing career with 2:20 left in the eighth round. Paul landed a steady diet of hard right hands and jabs to win by scores of 78-73 (Dennis O’Connell), 77-74 (Paul Calderon) and 78-73 (Chris Wilson).

“It’s a surreal moment,” said Paul, who improved to 6-0 with 4 KOs. “Hard work pays off. First and foremost, I want to say thank you to Anderson. He was my idol growing up. He inspired me to be great. He was the first celebrity I ever met. Without him, we wouldn’t have had a fight this year. He’s a tough mofo. A legend. I have nothing but respect for him. This just goes to show that anyone watching at home, chase your dreams. It’s never too late. I started boxing two-and-a-half years ago as a pro and just beat one of the greatest ever because I’m obsessed with this.”

“We were just fighting in the clinch, and he got caught on the way out,” Paul said of the knockdown. “He took so many hard shots throughout the whole fight. The dude is a real dog. You see what happens to everyone else that gets hit with that. He’s the toughest guy in the world but I just wanted it more. I’m a real dog and I left it all in the ring.

“They’re going to find something to say. ‘Fight a real boxer.’ I tried. If I were walking on water, people would say that I can’t swim. There’s always going to be haters. There’s always going to be critics. It’s an everyday part of life if you’re doing something and being successful. I don’t worry about it. This is just the start. I want Nate Diaz. Canelo, you too. You guys said, ‘You can’t beat a striker, you can’t beat a legend like Anderson Silva.’ I just did it. So why can’t I beat Canelo?”

The bout featured entertaining two-way action with Paul winning the final three rounds on the judges’ scorecards and Silva, 47, showboating, even dropping into a squat and frog-walking around the ring in the second round as Paul maintained his composure. Paul landed a number of hard right hands in an effort to duplicate the highlight-reel knockout he authored against former UFC champion Tyron Woodley last December on SHOWTIME PPV. But he was effective in landing scoring shots.

Paul, who wore feathered black and white trunks, ripped a three-punch combination that he punctuated with a hard right hand with 1:14 left in the seventh. Paul ended the round landing a sweeping right.

Paul, 25, landed another three-punch combination with a minute left in the sixth, starting down low and working his way up. But Silva (3-2) stormed back with a right uppercut and the two went toe-to-toe and exchanged heavy shots.

Most Valuable Promotions and Paul’s Boxing Bullies foundation provided over 300 tickets for local first responders from the Phoenix area to attend Saturday’s show. Paul and Boxing Bullies will continue the goodwill on Monday when they plan to donate $40,000 to help renovate the Central Boxing Gym in Phoenix. The event runs from 3 p.m. to 6 p.m. at Hall of Flames Museum where Boxing Bullies and 100 Club of Arizona will be honoring first responders and have a workout with over 70 local children.

Paul’s company Betr will also donate $5,000 to the 100 Club of Arizona, which provides financial assistance to families of first responders during the event.

In by far the toughest test of his young career, Ashton Sylve destroyed the vastly more experienced Braulio Rodriguez, dropping him with a stinging left uppercut with around a minute left in the first round. Rodriguez tried to get up but stumbled. When he finally rose, he wobbled backward, causing referee Tony Zaino to waive it off at 1:01 of the first round of their eight-round lightweight bout in the night’s co-feature. Sylve (8-0, 8 KOs) kept his knockout streak alive, earning his third first-round knockout of his career, which started in October 2020, while Rodriguez dropped to 20-5.

“First round KO – I can go a few more rounds,” Sylve said. “Come back here and put another show on.”

The first prospect signed by MVP, the 18-year-old Sylve kept his composure as the big-swinging Rodriguez cornered him and tried to land a haymaker. But it was Sylve who sliced a left hook in between Rodriguez’s shots that caused the damage. Sylve was economical in his destruction – he landed a total of three punches, according to CompuBox, with his second punch hurting Rodriguez and his third finishing him off. A former amateur star, Sylve stopped Rodriguez faster than the super lightweight contender Ryan Garcia, who needed five rounds to do so.

“I’m speechless,” Sylve said afterward. “I grew up under the spotlight, but this is something else. I’m ready for whatever comes next and I’m loving life right now. I don’t care who comes next. I just want the belt. There is nothing I want more than that right now.”

Sylve of Long Beach, Calif., walked to the ring in a Minions outfit, and he compared his surprising performance to the unexpected effect of Minions, whose small stature bely their powers, he said.

“I love the movie Minions,” Sylve said. “But at the same time, it’s inspirational. You never would think the Minions do what they do. And I don’t think people would think an 18-year-old would come out here and put a performance on like this with a veteran, experienced fighter.”

In a rematch of their split draw on a 2016 SHOBOX: The New Generation®, 118-pound contender Alexandro Santiago stopped Antonio Nieves when Nieves’ corner refused to let him come out for the eighth round of their 10-round bantamweight bout. Santiago was ahead on the judges’ scorecards by three scores of 68-65 at the time of the stoppage. Santiago landed 49% of his power punches, and 40 more power punches than Nieves of Cleveland, Ohio, according to CompuBox. Mexico’s Santiago called this the biggest win of his career and blamed nerves on the split draw in 2016 when he took the fight on short notice and was moving up in weight.

“In our first fight against each other, it was my big debut in the United States, so it was a different fight than what you saw tonight,” said Santiago, who improved to 27-3-5 with 14 KOs as Nieves dropped to 20-4-2. “I envisioned that it was going to end this way. I didn’t want it to go to the judges. I’m going to be even better trained for my next fight. I want to become the champion of the world, so I want to fight the best. The best that are out there in my division, I want to fight them.”

Top MMA striker Uriah Hall won a comfortable decision against former NFL star running back Le’Veon Bell on the PPV undercard, repeatedly ringing Bell’s head with jabs and right hands and causing Bell to use his legs, as he did on the gridiron. Hall’s constant pressure earned him three scores of 40-36 on the judges’ scorecards in the cruiserweight bout in both of their pro debuts.

“I want to keep boxing. I want Jake Paul,” Hall said in the ring afterward. “I’m the dude that’s going to come out here and expose him. If Anderson doesn’t do it, I’m going to be the one to f— you up.”

Hall landed 44% of his power punches (47 of 106) according to CompuBox, and appeared to stun Bell on multiple occasions with his right hand. A 38-year-old former MMA standout who made his mark in both the UFC and Bellator, Hall owns wins over Anderson Silva and former UFC middleweight champion Chris Weidman. After announcing his retirement from MMA in August, Hall agreed to face Bell, a former top running back for the Pittsburgh Steelers and New York Jets. Bell’s only boxing experience consisted of him flattening legendary running back Adrian Peterson with a one-punch knockout last month in a boxing exhibition.

“He definitely surprised me,” Hall added. “He’s pretty good. I do think he has a spot in this career. Obviously, this sport is mental. But for him to stick with his jab to the body, I didn’t know if he was trying to set me up, but he was very consistent with it. He was strong, man. I got cracked a couple times and I was like, ‘Holy shit.’ But I had to keep it together. I’m proud of him, man.”

In the pay-per-view opener, combat veteran Chris Avila dominated debuting “Dr. Mike” Varshavski in a four-round cruiserweight bout, relying on his experience and a potent overhand right to win a unanimous decision by three judges’ scores of 40-36.

A veteran of 17 fights in both the UFC and Bellator, Avila (2-1) bloodied and hurt Dr. Mike in the final seconds of the fourth as he had Dr. Mike stumbling back into the ropes. Dr. Mike earned the assignment on the strength of his more than 22 million followers but beyond an exhibition in May, had never fought before. A board-certified family physician and media influencer, Dr. Mike showed plenty of toughness but boxed as if he was still learning on the job.

“Props to Dr. Mike for taking the fight,” said Avila, who improved his boxing record to 2-1. “I don’t have any bad feelings towards him. I’m glad I got the win, but I would have liked to get the finish. It was a four-round fight, so I had to get the work in. He’s a tough guy, so props to him.”

Making his second appearance on a Jake Paul card, Avila is an everyday training partner of Nate Diaz, who was on hand on Saturday and cheered his stablemate on. With a minute left in the second, Avila staggered Dr. Mike with an overhand right and hurt Dr. Mike again with a flush left that had him in trouble and taking deep breaths. Avila bloodied Dr. Mike’s nose with a straight right hand halfway through the third round and had Dr. Mike (0-1) stumbling backward in the fourth under a barrage of punches.

“I don’t fight at 185 pounds,” Avila went on. “I’ll come back to 168, so whoever wants it come and get you some. Who’s next? [Chad Ochocinco] can get it. Any of these guys can get it. I’m not going to say any names but any UFC fighters that are locked into your contracts out there, get out and I’ll give you some. Anybody can get it. Any boxer. Anybody.”

In preliminary action on the SHOWTIME PPV COUNTDOWN show, Glendale product Danny Barrios Flores bloodied and stopped Phoenix’s Edgar Ortiz Jr. 30 seconds into the sixth round to move to 11-0 with 3 KOs in the super bantamweight bout.

In other action, the highly touted Shadasia Green, a former standout basketball player from Old Dominion, improved to 11-0 with 10 KOs as she dominated Ogleidis Suarez on her way to a TKO stoppage after Suarez’s corner decided she had sustained enough punishment following the fifth round in a super middleweight bout.