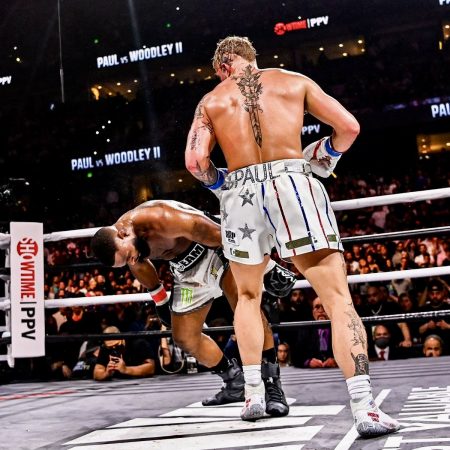 Jake “The Problem Child” Paul left no doubt in his rematch with Tyron “The Chosen One” Woodley, registering a strong candidate for Knockout of the Year in front of a sold-out crowd of 18,685 screaming fans at AMALIE Arena in Tampa. live on an action-packed SHOWTIME PPV telecast Saturday night.

All it took was one punch for boxing’s newest superstar to silence his critics and prove that his power ranks among the most devastating in the sport and carries into the later rounds is as real as it gets. A deadly right hand connected flush on Woodley’s chin in the sixth round, sending him face-first into the canvas and knocking the former UFC Champion out cold in a moment that quickly went viral and will live on the internet in perpetuity .

In addition to scoring the most emphatic win of his young career and moving to a perfect 5-0 with 4 KOs, Paul also had to fight through the most adversity he has faced yet. In the third round, Paul suffered a deep cut on his forehead after he was accidentally clipped by Woodley’s elbow.

“It was a tough fight,” Paul told SHOWTIME’s Ariel Helwani in the ring post-fight. “The blood was getting in my eye from when he elbowed me. I got the job done and I knew it would happen like that. I was setting up the shot the whole fight and he didn’t see it coming.”

Prior to the closing moments, it was a close fight. Paul was ahead on all three judges’ scorecards at the time of the stoppage, but it was the former MMA star Woodley (0-2) who was the busier fighter. After taking the fight on short notice following Tommy Fury’s withdrawal, Woodley threw 184 punches compared to Paul’s 170. Each fighter connected on 43 punches, but only one of them mattered in the end.

“Tyron is a legend,” Paul said. “Don’t take anything away from his career as a UFC Champion. I respect him for taking this fight on two weeks’ notice because Tommy Fury backed out of the fight. That was a tough fight right there.”

“I don’t know why I dropped my hands,” said Woodley in the post-fight press conference. “In this sport, it only takes one mistake. Literally one mistake.”