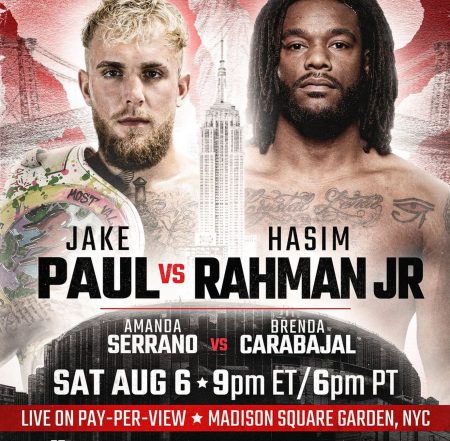 SHOWTIME SPORTS® and Most Valuable Promotions (MVP) yesterday announced that international superstar Jake “The Problem Child” Paul will dramatically step up his level of competition when he faces heavy-handed Hasim Rahman Jr., son of the legendary former two-time heavyweight world champion Hasim Rahman, on Saturday, August 6 live on SHOWTIME PPV (9 p.m. ET/6 p.m. PT) from Madison Square Garden in New York City in a cruiserweight bout scheduled for eight rounds. Tickets will go on sale July 12 at 1 p.m. ET and can be purchased at www.msg.com.

Paul and Rahman Jr. will go face-to-face for the first time since the announcement of the fight at a press conference on Tuesday, July 12 at 1 p.m. ET at Madison Square Garden to preview their highly anticipated showdown. Amanda “Real Deal” Serrano will be in attendance as well to address her upcoming Unified Featherweight World Title defense against power-punching Argentine Brenda “La Pumita” Carabajal co-headlining the event on August 6. The press conference will stream live on the SHOWTIME SPORTS YouTube channel and Jake Paul’s YouTube channel.

Rounding out the SHOWTIME PPV undercard are separate bouts involving two of the sport’s most exciting and rapidly rising prospects. Unbeaten knockout artist Brandun Lee (25-0, 22 KOs) and quick-fisted Ashton Sylve (7-0, 7 KOs) will look to take the next steps in their accelerated developments before Paul and Rahman Jr. settle their differences, and Serrano defends her Featherweight belts.

“Fury fumbled the bag for the second time in a row and went into hiding, so I’m going to step up, again, and take on a new opponent on short notice,” said Paul. “Nothing but respect for Hasim Rahman Jr., a professional heavyweight boxer with a 12-1 record who comes from a legendary boxing family. He’s bigger, he’s stronger and he’s more experienced. But guess what? I’m crazier. I’m raising the stakes and on August 6, I will get my respect under the bright lights of Madison Square Garden.”

The 6-foot-3 Rahman Jr., who has fought as heavy as 278 pounds and has campaigned exclusively at heavyweight in his pro career, steps in for Tommy Fury, who withdrew from a bout with the famous influencer for the second time in eight months.

“Jake Paul and I sparred two years ago and let’s just say I took it easy on the kid,” said Rahman Jr. “August 6 is not a sparring session. I am going to separate him from God’s conscience. My name is Hasim Rahman Jr., and I am going to knock out Jake Paul. Period.”

Paul (5-0, 4 KOs) and Rahman Jr. (12-1, 6 KOs) are familiar with one another from their days as sparring partners. Rahman Jr. helped Paul prepare for his pro debut against AnEsonGib, which Paul won in spectacular fashion via first-round knockout in January 2020. When Rahman Jr. sparred Paul again to help him get ready for his second fight against the NBA slam dunk champion Nate Robinson later that year, Rahman Jr. praised his opponent for improving both his technique and punching power. Paul detonated a right hand that knocked Robinson out in the second round of their bout.

Rahman Jr. is inarguably the most experienced boxer on Paul’s professional resume. Rahman Jr. studied his craft under the tutelage of famed trainers like Emanuel Steward and Calvin Ford, learning how to fight ambidextrously, something his famous father never did. After growing up in the sport, Rahman Jr. amassed around 100 amateur fights, winning the prestigious Junior National Golden Gloves and Junior National Police Athletic League championships. Rahman Jr. turned pro in 2017 and jumped out to a 12-0 record with six knockouts, showcasing deft footwork and heavy hands.

In his most recent bout in April, however, Rahman Jr. was stopped controversially in the fifth round by James McKenzie Morrison, son of former heavyweight champion Tommy Morrison. When the referee waived off the fight with Rahman Jr. on his feet, Rahman Jr. complained bitterly in the ring that he should have been allowed to continue against Morrison, who improved to 20-0-2 with 18 KOs.

Now, Rahman Jr. steps into this high-profile SHOWTIME PPV main event bout at Madison Square Garden with hopes of notching a turnaround win in the same fashion as his famous father and namesake. After suffering knockout losses in 1998 and 1999, Rahman stormed to prominence in 2001 when he decked Lennox Lewis with an overhand right in the fifth round to win the Unified Heavyweight World Championship in South Africa. In 2005, Rahman became a two-time heavyweight champion when he won a vacant title against Monte Barrett.

Lee, 23, has won 15 of his last 16 fights by knockout and has shown both one-punch power and the ability to out-box his opponents. He most recently dominated tough veteran Zachary Ochoa in April and has quickly established himself as one of the most talented 140-pounders in the division.

Sylve, 18, is the first prospect signed by MVP and already finds himself boxing on the biggest stage in the world at Madison Square Garden on SHOWTIME PPV. The undefeated teenage sensation has stopped all of his opponents inside of four rounds with his quick-trigger reflexes, high boxing IQ, and heavy hands. He recently knocked out Giovanni Gutierrez in the first round in May during his MVP debut at lightweight.

The Paul vs. Rahman and Serrano vs. Carabajal event is co-produced by SHOWTIME PPV and Most Valuable Promotions (MVP), a company founded by Paul and Nakisa Bidarian.  Holden Boxing will be the licensed promoter of the event, and Paul and Bidarian will serve as executive producers for the event. The pay-per-view telecast is produced and distributed by SHOWTIME PPV.