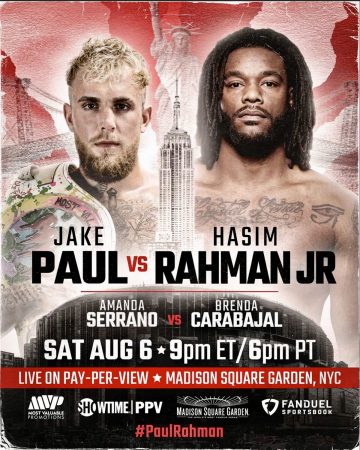 The verbal jabs continued one week ahead of the Jake “The Problem Child” Paul and Hasim Rahman Jr. mega-fight as Rahman Jr. participated in an open media workout Tuesday night at DLX Boxing in Las Vegas. He wasted little time dissing Paul as a “mockery of our sport” saying he respected Paul’s work ethic, but that he is looking to “expose him for the fraud he is.”

Here is what the principals had to say Tuesday night:

“We’ve had an amazing camp and I just want to thank my team. From my track coach to my strength and conditioning, all my coaches have been there for me. Just taking care of every little thing down to my nutritionist preparing my meals. Everyone is in sync and we’re ready to go.

“There’s nothing Jake Paul does that concerns me. I’m just super confident going into this fight. I feel like this guy is not at my level. He made a mistake picking me.

“Being in Vegas is amazing. My family and I came here because of boxing and we’ve been training for what could be the biggest fight of the year. It’s on me now and I have Vegas on my back. I have a lot of support and this is my home. I love it here. There’s not a better place to be and then to go from here to the mecca of boxing next week is just a beautiful thing. It’s poetry in motion.

“Fighting in Madison Square Garden happened so fast – I didn’t think it would happen so fast. But it’s here and I’m ready and I know what I signed up for. We’re going to go in there and make it look easy.

“I respect his work ethic but come August 6 I look to expose him for the fraud he is.

“It’s similar to when my father knocked out Lennox Lewis. He had a target on his back. I’m looking to do the same thing and to get that target on my back so I can fight for a world championship.

“I just have one final message: Jake Paul is going to fall!”

“We’re looking forward to knocking Jake out. I feel like when you get a certain status you start feeling you’re invincible. You start thinking you can do it all. But it’s one thing to say something, and another thing to go out there and do it. So when he has to go out and do it, he’s going to realize it wasn’t as easy as he thought it was going to be. Once he wakes up.

“We’re not really concerned with Jake Paul’s power. We don’t need to show how good our chin is. We don’t need to show what his right hand can do. What we can do is take his right hand away from him. We aren’t going to get hit with the right hand, but if we do we are going to fire back with our own counter. It’s going to be an interesting fight. Jake Paul can fight. Don’t get it twisted. But I’m not impressed by the knockouts he’s had. I don’t really feel like he’s knocked out a fighter yet.”

“I see Rahman Jr. winning in the sixth round. He’s confident and he’s doing everything by the book. He wants this fight. Jake made a big mistake.

“We’ve been working on everything. Movement, speed, and mainly stamina. We know he has really good punching power, and legs. So, if we get good stamina, we know we are good.

“The best thing about Jake Paul is he’s probably going to be in great shape. But you’re fighting a real boxer now. Good punching power and good combinations and someone who is not afraid of you and who is going to bring the fight to you.

“I’ve been with Hasim about four, five years. He’s right there. He’s where he’s supposed to be for this fight. I see him three years from now fighting for a world championship.”

Despite the Jake Paul vs. Tommy Fury fight falling apart for the second time, The Problem Child tells TMZ Sports he STILL wants to beat the pugilist reality star’s ass … after he defeats Hasim Rahman Jr.

“I’m considering [fighting Fury] after August 6, but I want to fight at Madison Square Garden, and the show must go on whether or not Tommy Fury’s in the arena. I don’t wait for people. I don’t need to wait around. I have a responsibility to my fans to put on shows.”

Of course, Jake and Tommy were set to scrap at MSG in NYC in August … until Tyson’s younger bro learned he wasn’t able to enter the United States.

“I don’t buy it. I had multiple people hit me up that said, ‘I can get him in. I have connections to people at the embassy. We’ll get him his visa, no problem.’ And I DM’ed Tommy and he just went into hiding.”

FYI, it’s the second time Jake and Tommy were scheduled to fight. Back in December, Fury pulled out after saying he developed a “chest infection.”

Enter 31-year-old Hasim Rahman Jr. — a professional boxer with a 12-1 record who previously trained with 25-year-old Paul — stepped in on short notice to accept the fight.

He’s bigger and more experienced … so, we asked Jake if he believes HR Jr.’s a tougher test than Tommy.

“Yeah, this is a harder opponent than Tommy Fury,” Jake says.

The 5-0 boxing star continued … “Look, [Hasim] has more amateur fights, he has more heavyweight fights. He’s a heavyweight. He’s been in boxing his whole entire life. He’s older, more experienced than Tommy Fury and has been in a lot bigger fights and has sparred with some of the toughest heavyweights in the world.“

In fact, Jake says Rahman Jr. is such a step up in competition, his own brother and team advised him NOT to accept the fight.

“Really my manager, and even my own brother [Logan] was like ‘Yo, you shouldn’t be doing this fight. Like why do you want to do this? The risk isn’t worth the reward.’”

“And I was just like, ‘Yo, I’m built different.’ I really want to do this. I want to prove to the world that I can knock out a professional boxer no matter how good he, or she is, or anyone. I’ll knock out anyone!”

We also talked to Jake about star boxer Amanda Serrano, signed to Paul’s MVP promotions, beef he has with Rahman, and much more!

Fight goes down August 6 on Showtime PPV! Then, third time’s a charm?