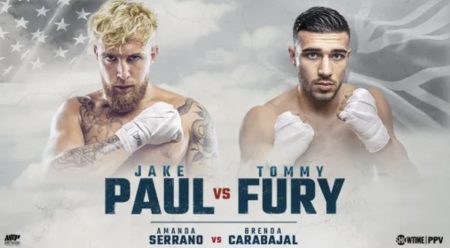 Paul (5-0, 4 KOs) and Fury (8-0, 4 KOs) will go face-to-face for the first time at a press conference on Wednesday, June 29 at Madison Square Garden to preview their highly anticipated showdown. Serrano (42-2-1, 30 KOs) will also be in attendance while the challenger Carabajal (18-5-1, 9 KOs) will remain in Argentina to focus on her training. The press conference will stream live on the SHOWTIME SPORTS YouTube channel and Jake Paul’s YouTube channel.

Paul and Fury were originally slated to settle their differences in December, but Fury withdrew from the bout because of a medical issue. Paul went on to record a scintillating one-punch knockout of Tyron Woodley who stepped in as a late replacement for a rematch of the pair’s August 2021 clash. While Paul expressed little interest in granting Fury another opportunity, he has since changed his mindset. The Sports Illustrated 2021 Breakout Boxer of the Year wants to punish Fury for withdrawing from their December fight and to silence the naysayers who have questioned the quality of his opposition so far in his young career. The 25-year-old Cleveland native started his pro boxing journey in January 2020 and is facing an opponent in Fury who is a more experienced boxer than he has faced and comes from a renowned boxing family.

“I wasn’t sure I was going to say yes to another potential matchup against Tommy after he pulled out of our matchup last year,” said Paul, who will face Fury in a scheduled eight-round cruiserweight bout. “But ultimately, knocking out a Fury was too appealing to pass up. I’ve proven I am dedicated to boxing in and out of the ring, from promoting fights, championing fighters and fighter pay, to knocking out my opponents. The Fury’s cannot say the same, they are selfish tossers. On August 6, at the mecca, Madison Square Garden, the world will see why I am on my way to being a world champion. I’m honored to fight under the same lights as some of the greatest professional boxers in history.”

The half-brother of WBC Heavyweight World Champion Tyson Fury, Tommy won four of his first five bouts by stoppage after turning pro in 2018 and most recently dominated a 10-1 opponent in April to capture his eighth win in front of 94,000 fans. Fighting out of Manchester, England, Fury started boxing at 12 years old and won two regional titles, reaching the U.K. national final in 2016.

“The Paul brothers’ boxing charade is about to come to an end once and for all,” Fury said. “I am a boxer. My opponent plays boxing. Jake Paul has been dressed up to look like a boxer against retirees from other sports. On August 6, I will show the world that he does not belong in the ring. Thank you to my promoter Frank Warren, Most Valuable Promotions and SHOWTIME® for letting me permanently shut up Jake Paul. I look forward to headlining Madison Square Garden and knocking out this clown.”

After knocking out British YouTube star AnEsonGib in his boxing debut and defeating former NBA star Nate Robinson with a highlight-reel knockout, Paul made quick work of former MMA champion Ben Askren in April 2021 with a first-round knockout. Paul has since defeated Woodley twice on SHOWTIME PPV – the second time with one of the most devastating knockouts in recent memory in front of a sold-out crowd. Paul is fighting out of Puerto Rico under the tutelage of Danny Smith and B.J. Flores.

Having won titles in every division between 115 and 140 pounds, Serrano, a Puerto Rican southpaw from Brooklyn, holds the Guinness World Record for most women’s boxing world championships (7) won in different weight classes. Her narrow split-decision loss to Taylor in a lightweight championship bout at Madison Square Garden drew a raucous, sold-out crowd of 19,187 who observed Serrano nearly finish Taylor off with a barrage of punches in the fifth round.

“I’m still in shock that I’ll be headlining The World’s Most Famous Arena twice in less than six months,” Serrano said. “Brenda is a very tough opponent and has never been knocked out, so I know I will need to be on my A game to change that. But I promise you, I am not leaving the outcome for the judges to decide. I am looking forward to fighting in front of my hometown crowd again on the biggest stage in the world and giving them the show they deserve.”

Carabajal captured the interim WBO Featherweight World Title beating fellow Argentine Debora Dionicius by majority decision in May. In 2019, Carabajal became the first Argentine female boxer to ever win a world title on American soil when she scored a unanimous decision over Elena Gradinar in Atlantic City, N.J., for the vacant interim WBO Featherweight belt. Born in the small town of Palma Sola in the northern province of Jujuy, Argentina, Carabajal was Argentina’s super featherweight champion from 2015-17 and was a silver medalist in the South American Games. She has faced six world champions and has stepped into the ring against notable names like Gradina, Maria Moderna, Paola Ibarra, Maria Capriolo and Tamara Nunez.

“This is the most important bout of my career,” said the 31-year-old Carabajal. “I know that my opponent is one of the best female boxers in the world but I want to face the best fighters. This chance finds me in my best physical and mental shape, so I’m going to take advantage of it. Nothing is impossible. I dare to dream of becoming world champion again, but this time in the majestic Madison Square Garden.”

The Paul vs. Fury and Serrano vs. Carabajal event is co-produced by SHOWTIME PPV and Most Valuable Promotions (MVP), a company founded by Paul and Nakisa Bidarian on the premise that content is king, and fighters are the content creators in combat sports. Holden Boxing will be the licensed promoter of the event, and Paul and Bidarian will serve as executive producers for the event. The pay-per-view telecast is produced and distributed by SHOWTIME PPV and it will feature other exciting high-stakes, professional boxing matches which will be announced in the coming weeks.