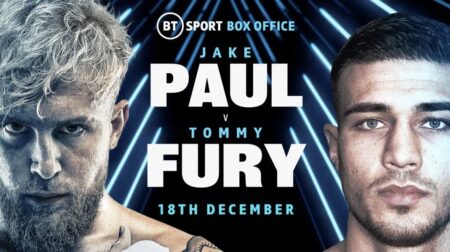 On Saturday 18 December BT Sport Box Office will broadcast Tommy Fury’s eagerly anticipated fight against Jake Paul exclusively live in the UK. After a war of words spanning several months, the pair will finally get to meet in the ring live from the Amalie Arena, Tampa, Florida.

Jake and Tommy have been embroiled in a feud this year, which started when big brother and heavyweight world champion, Tyson Fury, called on Jake to fight Tommy. The two fighters will finally get a chance to settle their differences during the pay-per-view fight in December.

Promoter Frank Warren said “I am delighted to deliver this fight and this event to BT Sport Box Office. I think we’re going to see something very special. Both fighters wanted it so we made it happen. Jake Paul has talked the talk and if he can’t walk the walk, then he won’t be in that ring very long with Tommy.”

Fury, the youngest brother of WBC heavyweight champion Tyson, beat Paul’s sparring partner Anthony Taylor with relative ease on the undercard to take his professional record to 7-0, with four wins coming by way of knockout.

Titled #PaulFury: One Will Fall, the event is produced and presented by Most Valuable Promotions and SHOWTIME PPV and promoted in association with Tony and Bryce Holden of Holden Productions. The pay-per-view event is produced and distributed by SHOWTIME PPV in the United States, and will feature other exciting high-stakes, professional boxing matches which will be announced in the coming weeks.