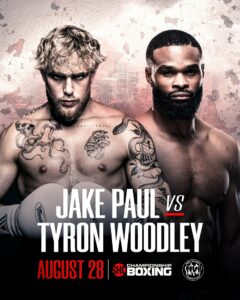 “I told him I’ll pay you double your purse if you beat me. But if you lose, you have to pay your purse to my charity. He lacks confidence. Why wouldn’t you take that bet as a fighter if you knew you were going to win? To make double the money? This is the biggest payday of your life and you can make double? Put your money where your mouth is.

“He’s a good striker. He’s known for knocking people out. But I think when I beat Tyron, people have to put respect on my name. But that’s not what I’m here for to be honest. I already know how good I am. I know that this is going to be another easy fight. That’s why SHOWTIME is in business with me. You’re looking at the future of boxing.

“He’s not as good as me and he’s playing catch-up. We see holes in his whole entire game and he has try to learn how to box. He’s stiff. Muscles don’t fight and he’s going to be out of his element. This is boxing. This isn’t MMA. You can’t learn how to box in this amount of time. Now we’re going to show him the reins. The Disney kid is going to beat up the five-time UFC champion of the world. It’s going to be hilarious.

“I haven’t even shown my fighting abilities at all. I haven’t even made it past two rounds in my professional career. I haven’t been hit in the face. Nobody can even see if I have a chin or my inside fighting game. I haven’t even warmed up yet. And by the way, I’m the type of fighter that gets better the longer the fight goes on. I get better in sparring so I haven’t even been able to warm up and I’m excited to show my ability if he can make it out of the first round.

“I’ve predicted every single one of my fights. I said Ben Askren, first round. I said Nate Robinson, first round. He got to the second. I said in my first pro fight, first round. I don’t think Tyron will make it out of two rounds. You might not even get to see my boxing abilities in this fight to be honest.”

“I’ve always wanted to box my whole life but never did it. This is my opportunity. This is a kid that’s a power-puncher. He’s got a lot of strength behind him. This is going to be a big platform to showcase what I can do in a boxing ring. And he’s a fighter. He can fight. At the end of the day, you can watch him and the timing, the rhythm and the footwork is there.

“He hasn’t fought very long. But the little action that I have seen was clean. Good defense. Nate was rushing him, he protected himself and he came out of his shell and cracked him.

If you like what we do and wish to support us, you can do by clicking the ‘PayPal’ button. Whether it be just $1, your help can keep us bringing you the latest multi-language boxing news and results from around the world and will also help us expand so we can bring you even more content in the future!