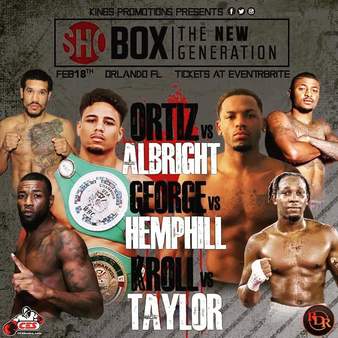 For an up-and-coming fighter who has yet to break through that glass ceiling, Showtime’s long-running series, ShoBox: The New Generation, is the next best thing to overnight success.

Since its inception in 2001, The New Generation has developed into boxing’s premier proving ground for top prospects on their journey to stardom. The concept of the show, spearheaded by ShoBox executive producer Gordon Hall, was to match unknown prospects in step-up fights in front of a national viewing audience, thereby offering these fighters the opportunity to showcase their talents while allowing the fans the opportunity to follow them throughout their careers.

The formula works – more than 75 ShoBox fighters have become world champions, many of whom got their big break on the The New Generation.

Unbeaten Worcester, MA, lightweight Jamaine Ortiz (14-0-1, 8 KOs) could be the next one on that list. Tomorrow night in Orlando, Ortiz makes his long-awaited ShoBox: The New Generation debut at the Caribe Royale in the 10-round main event against Philadelphia’s Nahir Albright (14-1, 7 KOs) for the vacant NABF 135-pound title. The telecast begins live at 9 pm ET.

“You’re not going to want to miss this fight,” Ortiz said. “It’s going to be a great fight. I can just guarantee that I’m going to come out on top and win. Everybody tune in.”

The stakes are incredibly for so many reasons; first, the opportunity to fight – and win – on ShoBox has proven beneficial for so many young fighters. Then there’s the allure of the NABF title, which, due to its affiliation with the WBC, grants the winner an automatic spot in the world rankings, a great way to fast-track one’s path to a shot at a world title.

A highly decorated amateur who competed in the U.S. Olympic Trials before making his professional debut in 2016, Ortiz understands pressure and has passed each test in his young career with flying colors. Under the guidance of promoter Jimmy Burchfield Sr. and CES Boxing, Ortiz has carefully climbed the ladder with each fight more important than the last. His timeline is unmatched:

May 13, 2016: Stopped Josh Parker at the 3:00 mark of the opening round in his professional debut
December 7, 2017: Capped a perfect 4-0 year with a unanimous decision win over 13-win veteran Derrick Murray
May 11, 2018: Stopped Philadelphia’s Tyrone Luckey in the third round of a scheduled six-round bout to improve to 9-0
February 23, 2019: In biggest win of his career, defeated previously unbeaten Ricardo Quiroz of California to capture the vacant WBC World Youth Lightweight Title
August 9, 2019: Succeeded in first defense of his WBC title, beating French challenger Romain Couture by unanimous decision
February 28, 2020: Headlined first fight in his hometown of Worcester with a first-round knockout win over 22-win veteran Luis Castillo
November 28, 2020: Became the first fighter to stop challenger Sulaiman Segawa, finishing his opponent in the seventh round of a scheduled eight-round bout on the undercard of the Mike Tyson-Roy Jones pay-per-view event in California
April 24, 2021: In his first appearance on ESPN, fought to a draw against fellow unbeaten lightweight Joseph Adorno, surviving two knockdowns to keep his unbeaten record intact.

There’s little Ortiz has yet to accomplish, but winning tomorrow night and capturing the NABF title immediately puts the entire lightweight division on notice. Truth be told, it’s a great time to be an up-and-comer at 135 pounds, and Ortiz has made it clear his goal is to compete for one of the coveted world titles in his weight class before the end of 2022.

There isn’t one particular fighter on his radar, but Ortiz is familiar with all of them, whether it’s Devin Haney, Gervonta Davis, or George Kambosos, all of whom are thriving amidst this unparalleled lightweight renaissance. Kambosos recently won the WBA, IBF, and WBO lightweight titles from Teofimo Lopez, who many considered the top name at 135 pounds after he beat Vasyl Lomachenko in October of 2020.

What’s evident is there’s no clear-cut leader of the pack; the household names such as Haney, Davis, Lomachenko, Kambosos, and Joseph Diaz are all capable of taking home a title on any given night – and it wouldn’t be a shock if other up-and-comers like Rolly Romero or Isaac Cruz found their way into the conversation by the end of the year. The division hasn’t seen depth like this since the Julio Cesar Chavez-Edwin Rosario-Pernell Whitaker-Ray Mancini era during the mid-‘80s to early-‘90s.

Like many young fighters, Ortiz is learning the ropes in and out of the ring. Six years into his career, he has a better understanding of the business side of the sport, which can often be as grueling as the beatings accrued between the ropes. After spending many years as an apprentice carpenter, Ortiz is now dabbling in real estate, trying his hand at the stock market and cryptocurrency and investing in properties, surrounding himself with the right team to ensure his financial success long after he finishes boxing.

Those, however, are long-term investments. The short-term goal is to clean house among 135-pounders. Who would dare doubt him? Given his success at every step of the way, there’s no reason the soft-spoken, yet hard-hitting, lightweight can’t be the next up-and-comer to join the current fraternity of rising stars in his weight class. Tomorrow night’s main-event showdown will provide answers to a lot of questions and perhaps introduce a worldwide audience to boxing’s next great champion.