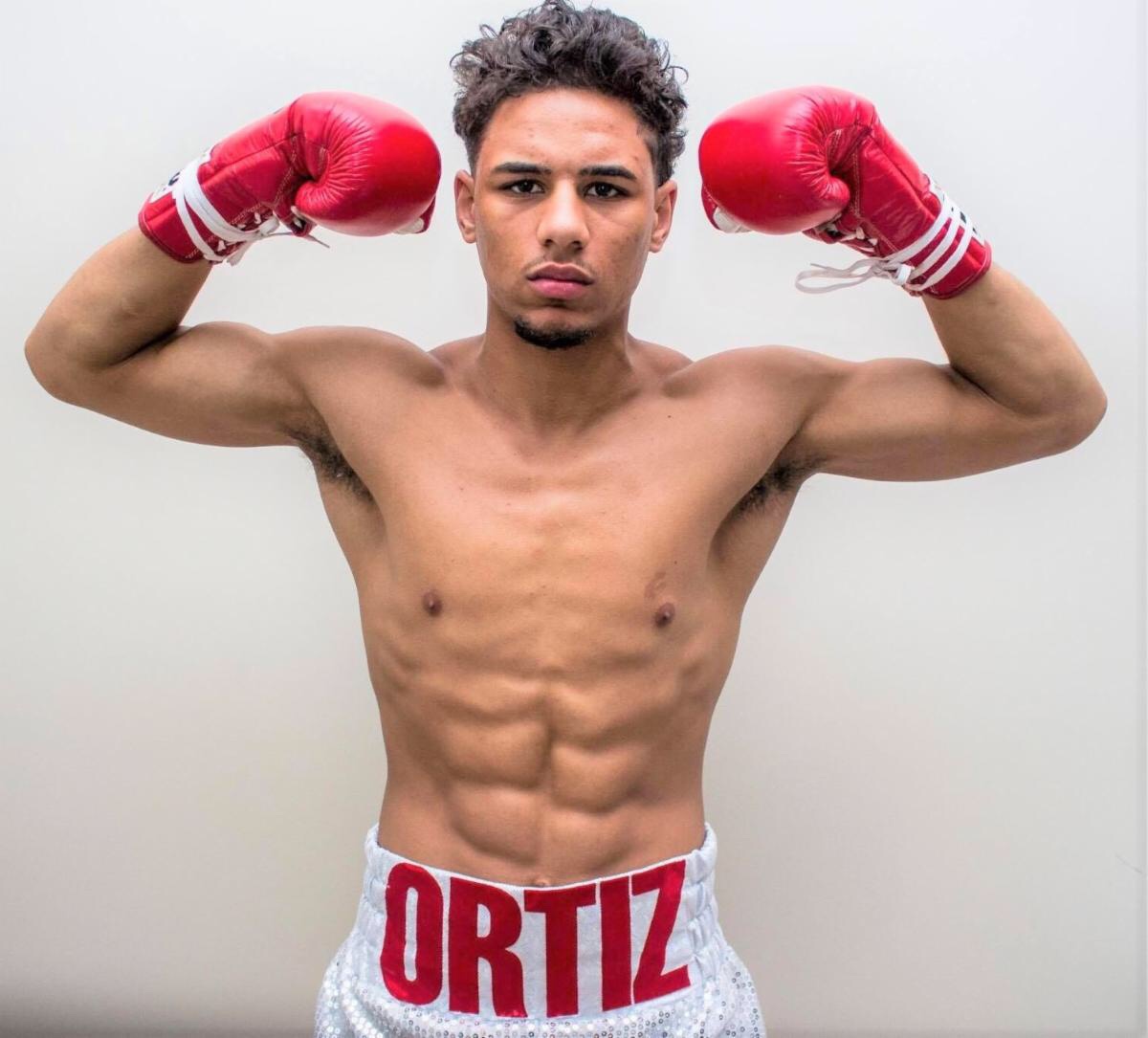 WORCESTER, Mass. (November 24, 2020) – Many if not most Americans will be enjoying a traditional Thanksgiving meal this Thursday, eating turkey, stuffing and pie, along with watching pro football all day and night.
Not so, though, for undefeated lightweight prospect Jamaine “The Technician” Ortiz(13-0, 7 KO’s), who will be flying from Boston to Los Angeles, to fight on Saturday night’s high-profile Mike Tyson-Roy Jones, Jr. show at Staples Center.
Ortiz, the reigning World Boxing Council (WBC) Youth World lightweight champion, will take on Ugandan southpaw Sulaiman Segawa (13-2-1, 4 KO’s), fighting out of Maryland, in an 8-round match for the vacant World Boxing Council (WBC) USNBC (U.S) lightweight title.
The 24-year-old Ortiz will travel with his head coach,Rocky Gonzalez, and cut-man Kendrick Ball, who will fill in for “The Godfather of Worcester (MA), boxing,”Carlos Garcia. He will not travel cross-country during the COVID-19 pandemic because of his advanced age.
A National Golden Gloves Hall of Fame trainer, Garcia was Ortiz’ first boxing coach as an amateur, and he has worked his fellow Worcester resident’s corner during Ortiz’ 4 ½-year professional career.
“Carlos will be with us in spirit,” Ortiz said. “We understand. Fighting is my career and part of that is missing out on Thanksgiving this year. I’ll be eating on the plane. This is more important, just business, part of my job. It is what it is. I’m a big family person and I see them on a regular basis, not just on holidays. I’ll get to eat my turkey when I return home.”
Ortiz like most boxers hasn’t been active due to the pandemic. His last fight was this past February at home in Worcester when he stopped Luis Ronaldo Castillo (22-5) in the second round.
Segawa’s last fight was an 8-round split draw with Zhora Hamazaryan (9-1-1) in January. In 2018, he lost decisions to Abraham Nova(12-0) for the vacant NABA super featherweight title and William Foster(7-0) for the vacant crown. Ortiz knows both of those fighters well having defeated Nova in the amateurs and New Haven’s Foster is a fellow New Englander.
“He’s a tough dude,” Ortiz spoke about Segawa. “His fight with Nova was close (96-94, 96-94, 97-93). He took both the distance; they couldn’t take him down. And he’s beaten some undefeated fighters (10-0 Godwin Rosa, 6-0 Brian Gallegos).
“He’s a good fighter who can win rounds. A slick fighter, but he can be a little wild, and that can be dangerous. It’s going to be challenging for me. I need to be smart, listen, and be tight. I can’t get caught when he throws wild punches.”
Although Segawa is a replacement and the opposite of his original opponent, Jamaine isn’t overly concerned that Segawa is a southpaw, even though he’s only fought one lefty as a pro (Victor Rosas in 2018), because to some extent he is ambidextrous.
“Luckily,” Ortiz concluded, “I had good sparring with a southpaw. I fight left-handed a lot myself. I shoot basketballs left-handed, bat left-handed in baseball, and arm wrestled with my left hand. A friend just sent me a picture from 2007 and I was in a southpaw stance.”
Ortiz is promoted by Jimmy Burchfield (Classic Entertainment and Sports) and advised by Richard Shappy and Eddie Imondi.

Tyson vs Jones Jr, Dubois vs Joyce & Jacobs vs Rosado Boxing Odds Eddie Hearn on Joshua vs Fury: “Obviously in The UK” But…