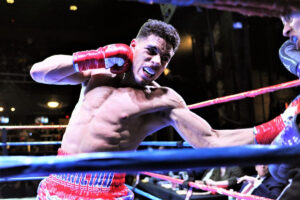 Undefeated lightweight prospect Jamaine “The Technician” Ortiz (14-0, 8 KOs) has started to make waves in arguably boxing’s best and deepest division.
The Worcester, Massachusetts fighter is ranked No. 5 by the North American Boxing Federation (NABF), No. 14 by the United States Boxing Association (USBA) and North American Boxing Association (NABA), and he recently cracked the World Boxing Council’s (WBC) top 40 world rankings at 31.
“The lightweight division is the one everybody wants to watch,” Ortiz said. “They want to see the best fighters and in the lightweight division it doesn’t just mean No. 1 versus No. 2. Any of the top lightweights fighting each other is what fans want to see the most. This is the best division right now and it should remain this way for a while because so many of the top fighters are young.”
The 24-year-old Ortiz, the reigning WBC USNBC (U.S.) Silver lightweight champion, in addition to being a former WBC World Youth lightweight titlist, recently evaluated the elite lightweights in the world today.
Teofimo “The Takeover” Lopez (16-0, 12 KOs), reigning IBF, WBA, WBO and WBC Franchise world champion). Ortiz lost to Lopez in the final of the 2015 National Golden Gloves Championships on points, 3-0. “He’s got all the belts and has to be No. 1. He’s The Champ! Confident and explosive.”
Vasily “Loma” Lomachenko (14-2, 10 KOs), former 5-time, 3-division world champion. “He’s good but too small at 135 pounds. I like his style.”
Ryan “KingRy” Garcia (21-0, 18 KOs), reigning WBC Interim world champion. “He’s showing a lot of development.”
Devin “The Dream” Haney (25-0, 15 KOs), reigning WBC world champion) “Looks like he has the goods, but he hasn’t fought anybody. He definitely has the goods, so I can’t put him at the top yet, and he isn’t the real WBC champion (Lopez is.).”
Richard “RC” Commey (30-3, 25 KOs), former IBF world lightweight champion. “Tough! Definitely a tough fighter who is very strong.”

Javier “El Abejon” Fortuna (36-2-1, 25 KOs), former WBA super featherweight world champion. “I sparred with him. He’s a top contender who was world champion.”
Jorge “El Nino de oro Golden Boy” Linares (47-5, 29 KOs), former 4-time, 3 division world champion. “I like him. He’s pretty sharp, but old guys like him (35) don’t have a chance in this division.”
George “Ferocious” Kambosos, Jr. (19-0, 10 KOs), “He was my old high school teacher’s nephew. He’s from Australia and I know he sparred Manny Pacquiao. Fast and seems explosive, but at the end of the day, in the ring, it comes down to outsmarting your opponent.”
Lopez (23), Garcia (22), Haney (22) and Ortiz (24) are 24 or younger, as well as the only U.S.- natives in this group; Lomachenko (33), Commey (33), Campbell (33), Fortuna (31) and Linares (35) are all in their thirties.
“I think I’ll be fighting for a world title by the end of next year,” Ortiz added. “I want to fight whoever has the belts. Some of these guys may move up in weight, the older guys may not be contenders next year.
“Lopez has stood out and he’s still young. He’s earned his way to the top with his fight credentials. He’s young and doing a fantastic job knocking guys out in entertaining fashion.”
Team Ortiz is expected to soon make a big, exciting announcement about his next fight, which promises to be a major step up in terms of quality of opponent and interest, as well as provide   added exposure on a national platform.