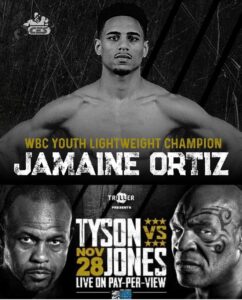 The 24-year-old Ortiz, fighting out of Worcester, Massachusetts, will fight on the undercard against Maryland southpaw Sulaiman Segawa (13-2-1, 4 KO’s) in an 8-round bout for the vacant World Boxing Council (WBC) USNBC (U.S) lightweight title.

“I feel good and I’m ready,” Ortiz said. “I’m privileged for this opportunity to fight on the Tyson-Jones card and get good exposure. I hope to steal the show. As a kid, I followed them both, especially Jones. I tried to imitate him”

Like all fighters, the COVID-19 pandemic has dramatically affected his career, although he has managed to train, albeit in various gyms and mostly by himself.

“It wasn’t too bad,” added Ortiz, who is an apprentice carpenter. “Not all of the facilities I use to train were open. Early on, I trained by myself, and did a lot of running. We were quarantined until late June, early July, but then I was able to get good sparring. So, overall, it wasn’t too much of a change.”

Ortiz is promoted by Jimmy Burchfield (Classic Entertainment and Sports) and advised by Richard Shappy and Eddie Imondi.

“We’re happy our fighter, Jamaine Ortiz, will be getting such great exposure and he will show the world what we already know here in New England,” Shappy commented. “Jamaine ‘The Technician’ Ortiz is a force that will have to be reckoned with.”

Badou Jack: “Why Would I Fight an MMA Guy?” Tom Little: “I’ve Promised Him a Proper Fight” (Alen Babic)