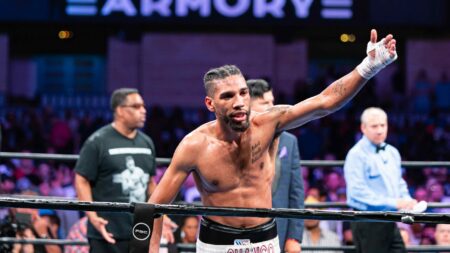 Jamal James and Radzhab Butaev will fight for the World Boxing Association (WBA) Welterweight World title on October 30 at the Virgins Hotel in Las Vegas, Nevada.

Premier Boxing Promotions is promoting the bout, to be broadcast by Showtime and will be part of the WBA-mandated box-off to define a single champion at 147 pounds.

it will be the first defense of James’ title. He won the interim title after defeating Thomas Dulorme in August last year, and was elevated to champion on February 4.

Meanwhile, Butaev was waiting for this opportunity after having fought Alexander Besputin, who tested positive for banned substances. Now the Russian will have his chance to fight for the black and gold belt.

The winner of this fight will have to fight the winner of Yordenis Ugas vs. his mandatory challenger, Lithuanian Eimantas Stanionis, who will fight for the super championship in the next few months. Once the box-off is over, there will be only one champion in the category.