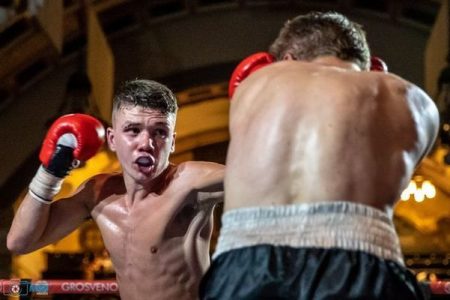 James Beech Jr. will be ready to go after the English featherweight title when he’s wrapped up his 2021 with a 16th pro contest.

His next ring action comes at the H Suite in Edgbaston, Birmingham, on the Sunday afternoon of December 19, as part of a show staged by BCB Promotions.

Beech has already been approved, by the British Boxing Board of Control, to take on Shabaz Masoud for the vacant national crown.

There are high hopes for Masoud, who has shone on BT Sport boxing under the Frank Warren banner, and he’s undefeated, with nine wins so far (two TKOs).

But Beech reckons his know-how from being a two-weight Midlands champion, along with challenging for British and Commonwealth honours, will have the beating of him.

The 24-year-old, from Bloxwich, has a 12-round grounding, having seen the final bell in his attempts to claim those major domestic prizes.

He was outpointed by Brad Foster, with the British and Commonwealth titles on the line, in 2020 after a contest where both men shed blood, due to cuts above the left eye.

Beech also went 10 rounds in July, where southpaw Chris Bourke saw him off through another points verdict, for the WBC International bauble. Both decisions were unanimous.

Those title tests were at super bantam, but he’s reigned at area level in both the featherweight and super feather divisions.

Beech knocked out Louis Fielding in the ninth round to get his first belt, at feather, in 2018 and outpointed Luke Jones, after the 10-rounds, the next year for super feather supremacy.

His last outing saw him rebound from the Bourke defeat with a victory over journeyman Dean Jones, a 40-36 points landslide the first of two keep-busy bouts.

He said: “I was hoping to get a title fight, before Christmas, but it hasn’t come up, so this is the next best thing. It’s all about keeping active.

“There is always a risk. If something happens in there, but it’s another risk going for a title when you haven’t boxed in a few months. I trust in my skills, so I’m sure I’ll be fine.

“I’m building up some power, too. I’ve been working on my strength and conditioning and I’m punching a lot harder, so maybe more stoppages will come.

“I felt a lot better in the ring last time. I know there might have been a drop in the level of opponent, but Dean is a game kid and wasn’t any push over.

“I could have actually done with something like that before the Bourne fight, when I hadn’t boxed in over a year. That showed on the night.

“I’m happy to make an agreement with Masoud for the English title and I’d fancy myself for that one. Some people would be writing me off, which would add another bit of motivation.

“He hasn’t really done anything yet, whereas I’ve boxed at title level against top prospects. I think my experience would be too much for him and I’m only 24.

“Those are the sort of tests that I get up for, I’m coming up to five years as a pro now and I’ve made a lot of progress, I just want to step up again now.

“There are no guarantees it will be Masoud. If it isn’t him, I’ll be ready to take another opportunity if something else comes up. Let’s wait and see.”

Artur Beterbiev vs. Marcus Browne this Saturday – full fact sheet 2-0 Katie Healy back in action in Birmingham this Friday