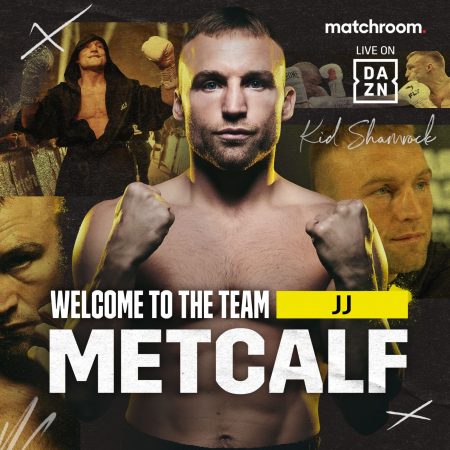 The former Commonwealth and WBC International Super-Welterweight Champion (23-2, 14 KOs) rejuvenated his career by outpointing hometown hero Lejarraga, a two-weight European Champion, in an excellent display of patience and boxing IQ.

Metcalf’s only defeats in the professional ranks have come at the hands of Bermondsey’s Ted Cheeseman in a jaw dropping battle for the vacant British Title in Gibraltar in March 2021 and Northampton’s Kieron Conway at the M&S Bank Arena in Liverpool in October 2021.

The son of Liverpool fight legend Shea Neary has earned back-to-back wins since teaming up with fast rising trainer Joe McNally at the renowned Rotunda ABC in Kirkdale, where he trains and fights alongside former WBO 154lbs World Champion Liam Smith.

“I’m delighted to be teaming up with Eddie Hearn and Matchroom,” said Metcalf. “I was made up to get the win over Kerman Lejarraga out in Bilbao last month. I needed to get that win to set me up for what comes next in my career. I’ve rectified the mistakes and I’m looking forward to a big chapter in my career.

“The win over Kerman moved me past the British level where I lost to Cheeseman and Conway. In my opinion it righted all of my wrongs. That win has pushed me on towards World Titles. Whatever they come up with, I’ll take. Everyone already knows that I’ll fight anyone, anywhere. Whatever Eddie fancies, I’ll go with him.

“My father has always been a massive part of my career; he’s trained me all the way through really. It’s great having Joe McNally and Declan O’Rourke in my corner. I’ve worked with Joe in the past, so I know how it feels. I’ve got a great team around me now and I’m confident they can secure me some big fights in the Super-Welterweight division.”

“The Lejarraga win was a great performance from JJ on away territory,” said Matchroom Sport Chairman Eddie Hearn. “It was a very disciplined and intelligent performance from JJ and the team. They put the perfect game plan in place to get the win. There’s nothing like an away day win. He’s in the top 15 with the WBA now and we’ll look through all of the options.

“JJ has suffered defeats and he’s bounced back. They’re the kind of fights that you have to be in to grow as a fighter. He jumped in with Ted Cheeseman in a Fight of the Year contender in Gibraltar and boxed Kieron Conway in a fight that was very close as well. He’s looked brilliant since he teamed up with Joe McNally and they want more big fights.

“He deserves a big fight next. He deserves his big night and big money. He wants the big one and as much money as possible out of the game. Every fighter wants that. People that have continuously stepped up and taken the challenges put in front of them deserve to get the big opportunities when they win.”